The Everest hopeful Scales Of Justice was too good late for the beaten favourite Hey Doc in Friday night’s 2020 Australia Stakes with the Moonee Valley night racing feature marred by the fatal fall of Manuel. 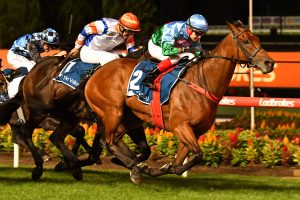 A stablemate to returning Winterbottom Stakes winner Hey Doc, the Tony & Calvin McEvoy-trained Manuel fell on the home straight at The Valley breaking his shoulder in the closing stages of the Group 2 $200,000 Australia Stakes (1200m).

Sadly, the reigning CF Orr Stakes champ could not be saved and was subsequently euthanised putting a dampener on the celebrations of winning trainer Lindsey Smith.

Manuel’s jockey Barend Vorster was conscious when taken to hospital on the night, scans revealing a broken collarbone that could likely require surgery.

Triple Group 1 winner Hey Doc jumped the favourite in the weight-for-age sprint and led as expected despite attempts from Dan McCarthy’s $91 roughie Ashlor to challenge for the front position.

Jockey Dean Yendall aboard Perth expat Scales Of Justice meanwhile was happy in the box seat, biding his time before charging home late to run down the top fancy even after dropping his whip in the final stages.

On the line Not A Single Doubt seven-year-old Scales Of Justice ($3.70) had three-quarters of a length to spare over the Luke Currie-ridden Hey Doc ($2.50).

In an eye-catching run by Shamexpress mare Embrace Me ($19), the Danny O’Brien-trained four-year-old handled a rise in grade second-up to finish just a neck further back in third to round out the Australia Stakes trifecta.

Despite the loss, Hey Doc is still expected to head to Dubai over the World Cup Carnival in March targeting the Group 1 Al Quoz Sprint (1200m).

Scales Of Justice meanwhile is likely to back-up on February 8 at Caulfield in the Group 1 C.F. Orr Stakes (1400m) over the same track and distance he won last year’s Memsie Stakes.

The Australia Stakes winner has shot to the top of futures markets on the 2020 C.F. Orr Stakes paying $4 through online bookmaker Ladbrokes.com.au.

“His work during the week was good and when his work is good, he brings that to the races.

Smith is also eyeing a March 14 run in the Special Condition $5 million All-Star Mile (1600m) back at Caulfield for Scales Of Justice.

The focus for the year however is getting a slot in the $14 million The Everest (1200m), the world’s richest turf race taking place at Royal Randwick on October 17.

“He may finish up in the All-Star Mile but he’s quite dynamic at the 1200 metres so I’ve always harboured a desire to take him to Sydney for The Everest,” Smith said.

“And he handles a wet track so that might be his race down the track.”