Said Com’s Epsom berth on the line in Tramway

An Epsom Handicap berth is on the line for Said Com when he steps out in the Group 3 $125,000 Tattersalls Club Tramway Stakes (1400m) at Warwick Farm tomorrow. 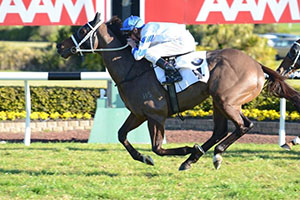 Said Com is set to resume in the Group 3 Tramway Stakes at Warwick Farm. Photo by: Steve Hart

Premiership trainer Chris Waller will be instructing new rider Blake Shinn to settle Said Com back off the pace in an attempt to regain his strong finishing burst after the four year old was ridden closer to the leader when a disappointing third to Kontiki Park in the $85,000 ClubNSW Spring Preview Handicap (1400m) at Rosehill on August 18.

“I’d like to ride him one or two pairs further back this week,” Waller said.

“His best run was second to Mosheen in the Randwick Guineas but that was as a three year old and he was fifth or sixth in the run there.”

“I don’t know how to assess his last run. If he is going to press on to the Epsom then he’ll need to show he’s capable in this race. If he’s not up to it then I’ll probably give him one more run and then send him out.”

Said Com showed glimpses of quality when he finished strongly along the rails when second to the top Victorian mare Mosheen in the Group 1 $500,000 Turnpoint Royal Randwick Guineas (1600m) at Randwick on March 17.

The O’Reilly gelding then ran unplaced behind Laser Hawk in the Group 1 $500,000 Flinders Lane Rosehill Guineas (2000m) at Rosehill on March 31 before being sent for a spell.

The four year old resumed from a break with a promising win over 1250m in a Canterbury benchmark 95 before his latest Rosehill third.

Said Com is one of three runners Waller has in the Tramway and like Said Com are entered in the Epsom Handicap later in the Spring.

Tough old stable star Rangirangdoo has to carry 61.5kg at his first run back from a spell while one of Waller’s many imports Class Is Class is having his first Australian start, not having raced since winning the Group 3 £50,000 Betfred Rose Of Lancaster Stakes (1 mile 2 ½ furlongs) at Haydock in England on August 6, 2011.

“He has a big weight so I don’t expect him to win first-up but he is in good shape,” Waller said.

“He hasn’t had any problems this time in and I’ve been happy with his trials.”

“He has an excellent Autumn, he was beaten half a head by Manighar in the Ranvet, ran fourth in the Chipping Norton and ran fourth to More Joyous in the Queen Elizabeth.”

Waller is unsure what he has with the imported Class Is Class who has been competitive in two Rosehill barrier trials at his only two public appearances since arriving from England.

“I’m not sure what I’ve got really,” Waller said.

“He hasn’t raced for a year and still has a bit of fat on him.”

Said Com in on the second line of betting for the Tramway at $4, behind Peter Moody’s promising Moment Of Change at $2.80 while Rangirangdoo and Class Is Class are both $18 chances.