Royal Symphony cemented his position as 2017 Ladbrokes Caulfield Guineas favourite with an incredible win in the Pin & Win Plate at Flemington this afternoon. 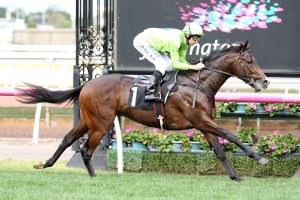 Royal Symphony could hardly have been more impressive in the Ladbrokes Caulfield Guineas. Photo by: Ultimate Racing Photos

There was plenty of big money for Royal Symphony in the lead-up to the Pin & Win Plate and he started the race as an odds-on favourite, but it was far for an easy watch for punters that took the short odds.

Royal Symphony got shuffled back in the early stages of the Pin & Win Plate and turning into the straight there was a wall of horses in front.

It looked as though he would not get a run in the final stages, but he eventually found clear running with 150 metres left to run and showed the turn-of-foot of a serious horse to run down a gallant Éclair Sunshine.

Dwayne Dunn admitted that not everything went to plan in the 2017 Ladbrokes Caulfield Guineas and he paid credit to the horse for getting him out of trouble.

“How he got out of that just shows how good a horse he is,” Dunn said.

“There were some people that wanted to play jockeys out there and I almost hit the floor early.

“I was in a position that I didn’t want to be and it was awkward.

“To his credit he showed race smarts today and he pushed through and accelerated again.

“That is what good horses do – they have that turn-of-foot and that is what he has done again.

“I was fortunate to get out of trouble, but going into the Guineas it is going to be another story.”

Trainer Tony McEvoy admitted after the Pin & Win Plate that he thought Royal Symphony was no chance of winning at the 200 metre mark and he was delighted that the classy galloper was able to extend his unbeaten run.

McEvoy confirmed that the Group 1 Ladbrokes Caulfield Guineas (1600m) is the major 2017 Spring Racing Carnival goal for Royal Symphony, but he isn’t sure what path the three-year-old will take to the race.

“That was very special,” McEvoy said.

“I nearly did the old can’t win.

“Dwayne peeled his way through the field and the way that he picked up late was things that special horses do.

“He is a gameday horse – when the bell goes he turns up and that is what you need to be a high-class race horse.

“I just want to see the horses condition and see how quickly he recovers to see whether we go straight to a mile or whether he needs a 1400 again.

“He was very fresh coming into today, but I thought that he was fit enough.

Royal Symphony is into $3 in 2017 Ladbrokes Caulfield Guineas betting and Ladbrokes took a $20,000 bet on the horse to win the Group 1 event in the lead-up to the Pin & Win Plate.