May 10, 2012 by Mark Mazzaglia
Home > Rough Habit to serve up Queensland Derby hopefuls

The Group 3 $125,000 Mittys Rough Habit Plate (2000m) at Doomben on Saturday will give several Queensland Derby hopefuls a chance to step up as a number of fancied runners have fallen by the wayside.

The Gai Waterhouse trained Fat Al, who was one of the early favourites for the  Group 1 $500,000 Channel Seven Queensland Derby (2400m) at Eagle Farm on June 9, has been sent to the paddock along with Anthony Cummings three year old Strike The Stars.

And a run in the Derby for Zabeelionaire is still up in the air after winning the Group 1 $500,000 Centrebet South Australian Derby (2500m) at Morphettville last weekend.

Also with the pending sale of Malandrino to Hong Kong interests which could see his withdrawal from the Rough Habit and if this happens it will open up the door for several runners to lay claim for Derby favouritism.

Managing part owner of Zabeelionaire, Brad Spicer has indicated that they have had a change of heart for the South Australian Derby winner after he was originally being sent for spell after his Group 1 win last Saturday.

“We were definitely not going but now Fat Al is out, we’ll need to have another chat about it,” Spicer said.

“We’ll see what Leon has to say about it but as of right now, he is not going but that may change.”

Trainer Leon Corstens brought Zabeelionaire from a Geelong Maiden win on March 29 to take out the Group 1 $500,000 Centrebet South Australian Derby (2500m) at Morphettville on May 5 and could give him his chance to win his second Derby for the season.

Corstens will monitor the Zabeel colt over the next week after the three year old was showing signs of a hard trip to Adelaide from his Victorian base.

“He had a float trip there, a race and then a float trip back so the whole thing was done in four days,” Spicer said.

“He left a little bit of feed on Saturday night and again on Sunday morning but he has recovered really well over the last couple of days.”

Cummings has decided to give Strike The Stars a blow after finishing fourth to Zabeelionaire at Morphettville and get him ready for a light Spring campaign.

And Waterhouse was of the belief that her promising three year old Fat Al was due for a break after racking up four straight wins when he led all of the way to take out the Group 3 $125,000 Johnnie Walker Frank Packer Plate (2000m) at Randwick on April 28.

“He has gone to the paddock, he has gone on holiday and a well-earned rest and he is twiddling his hoofs at present,” Waterhouse said.

“He had just come to the end of it. He looked terrific but my job is to monitor them and if I am not 110 per cent happy, you only get a very short break at this time of year to give them a spell and if you over cook it by a couple of weeks you have lost the time out.” 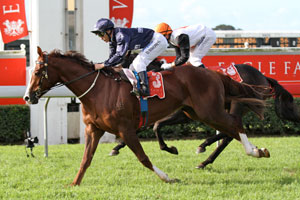 “The reason I turn them out is that they are growing all the time and I like them to get out in the paddock with the sun on their backs, mooching around and a change of atmosphere which is very good for both horses and people.”

A number of Rough Habit Plate hopefuls can enhance their chances for the Queensland Derby with a bold showing on Saturday and push their way up the marker order.

The Robert Heathcote trained Trump is one who will get his chance to lay claims for a Derby start if he performs well over the 2000m after taking out the Group 3 $125,000 MacArthur Museum Brisbane Gunsynd Classic (1600m) at Eagle Farm on April 28 on a heavy track.

And Peter Moody’s three year old Brambles can improve back on a dry track after finishing third to Trump at Eagle Farm.

Malandrino shares favouritism for the Derby at $4.50 with Zabeelionaire, who is still in the betting ahead of another Kiwi, Nashville and Isopach at $11. Trump is at $15 while the Peter Moody trained Brambles is at $21.