Redzel To The Everest After The Shorts Win

September 16, 2017 by Thomas Hackett
Home > Redzel To The Everest After The Shorts Win

Redzel will go into The Everest as a genuine contender after he recorded another strong win in the 2017 The Shorts at Royal Randwick this afternoon. 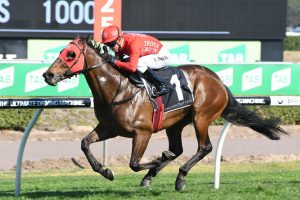 Redzel made it four wins on the trot with an impressive victory in The Shorts. Photo by: Steve Hart

It was revealed before the race that Glyn Schofield would lead at all costs on Ball Of Muscle and he did just that, while jockey Hugh Bowman was happy to trail the leading into the race.

Bowman and Redzel poured the pressure on Ball Of Muscle at the top of the straight and it took a while for the favourite to get past his rival, but he wore him down in the final 100 metres to score his fourth win on the trot.

Bowman said after The Shorts that he believes Redzel is the most improved sprinter in the country and he wishes that he had the ride on the five-year-old in The Everest.

“He is the most improved sprinter in the country,” Bowman said.

“In my opinion he is a genuine Everest hopeful this horse.

“There are no chinks in his armour and they have worked out exactly how he likes to race.

“He can set a good pace as you saw today and he can sustain a fight.

“I believe that Kerrin McEvoy will take the ride in The Everest and he will be a genuine winning hope.

“When they (the connections of Ball Of Muscle) announced that they were hell-bent on leading we at least knew what the plan was.

“I would have been happy to lead, but I didn’t want to lead at a pace that I was being pressured at.

“The funny thing was than when Glyn did set-up the lead on Ball Of Muscle, he wasn’t going quick enough for me and I poured the pressure on him.

“He is a fit horse, he has residual fitness from Brisbane and he is the most improved sprinter in the country.

“He is a Group 1 winner at this distance and I would like to be on him in The Everest if Kerrin is not available.

Chautauqua was a long way back in the early stages of the race and he was never able to get into the finish, but he still found the line very strongly in a performance that suggests he will be tough to beat in The Everest.