The Pinjarra Park Racecourse is one of the most historic in Australia and has been hosting racing since 1891. The track has always been well known for its relaxed, country style vibe and the backdrop of the Darling Range Scarp makes Pinjarra a very picturesque venue for racing. Pinjarra now holds 24 race meetings a year and has become a major workhorse track for Western Australian Racing – especially during the winter months.

The Pinjarra Park racecourse is the home of the Pinjarra Race Club and is situated in the Peel region of Western Australia. The racecourse is 86 kilometres south-west of Perth and it takes Perth-based punters less than an hour to drive to the popular track. 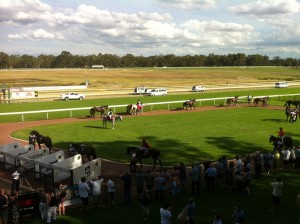 The Pinjarra Park racecourse track has a circumference of 1837 metres and is one of only a few tracks in Australia that is capable of hosting straight races due to its 1000 metres long straight. The straight length for regular races is 336 metres and statistics show that neither on-pace horses or swoopers have an advantage at the venue and horses are generally able to win from anywhere on the track.

Races can be held at Pinjarra from 1000 metres right up to 2400 metres and the majority of starts at the venue give riders plenty of time until the first turn, with a chute used for the start of races over 1500 metres and a mile, and this means that the track is up there with the safest in Australia.

The Pinjarra Cup is the venues feature race and is held in March. The race is held over a distance of 2300 metres and generally draws a number of quality stayers from right around Western Australia. Talented gallopers like King Brian, Moonlight Bay and Lords Ransom have all won the Pinjarra Cup, but without a doubt the most famous winner of the race is Rogan Josh.

Rogan Josh won the 1998 edition of the Pinjarra Cup while under the care of Colin Webster and after being transferred to leading trainer Bart Cummings the following year, went on to win the Group 2 Herbert Power Stakes (2400m) and the Group 1 Mackinnon Stakes (2000m) before he recorded an historic victory in the 1999 Melbourne Cup.