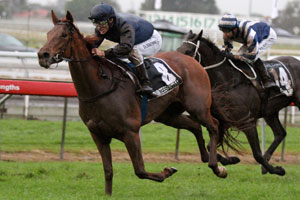 The John Sargent trained Quintessential is the third filly in as many years to win the Queensland Oaks following wins by Miss Keepsake (2010) and Scarlett Lady last year.

Quintessential put any fears aside that Sargent had of his filly handling the heavy track when she drew away over the final fifty metres to score a comfortable win from the Chris Waller trained Eliza Blues with Vittoria battling on for third spot.

In a bunching field coming to the home turn, Damian Browne had Quintessential just behind the leaders after giving her a nice run from the inside barrier and once she gathered in the leaders surged away for a clear cut win.

Sargent has been bringing horses to Australia for many years and was very happy to finally win a Group 1.

“I didn’t know if she would handle the conditions but it was a lovely ride and that helped a hell of a lot,” Sargent said.

“He got off the fence at the six hundred and then it all paid. But we had our queries with her on the wet. That’s about my sixth Group 1 but my first in Australia. That’s fantastic.”

Brown secured his fifth Group 1 win with a superb ride and said that Quintessential deserved the win with some good lead up form.

“She’s been racing terrific over here without much luck and bad barriers. I said to Sarg she only has to draw a barrier  in the Oaks to win and when she got one on Wednesday I was over the moon,” Browne said.

“But then the heavens opened up, I was a bit worried then. Full credit to Sarg and Bruce Compton, they had her spot on for the day.”