Godolphin were back in the winner’s circle at Caulfield preparing three of the first four fillies over the line in the Quezette Stakes 2019 results including the impressive winner Exhilarates. 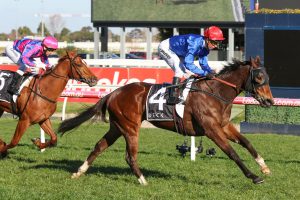 Just one race after the stable’s impressive colt Bivouac saluted by over four lengths in the Group 3 Vain Stakes (1100m), the Royal Blue was in show again with the James Cummings-trained Exhilarates taking out the Group 3 $160,000 Quezette Stakes (1100m).

She posted a winning time of 1:04.47, which was around a second slower than her Group 1 bound stablemate in the Vain Stakes.

The progressive daughter of Snitzel enjoyed her first victory since the $2 million Magic Millions Classic (1200m) at the Gold Coast back in January and emulated Sunlight who did the Magic Millions / Quezette Stakes double in 2018.

Exhilarates was disappointing last time out at Rosehill in the Group 1 $3.5 million Golden Slipper Stakes (1200m) back on March 23 when a Heavy-rated track dampened her run in the classic.

Slightly firmer going at Caulfield on P.B. Lawrence Stakes Day worked in her favour with jockey Kerrin McEvoy aboard for her one and three-quarter length Quezette Stakes victory over the Danny O’Brien-trained Absolute Flirt.

“The race was put on a little tempo-wise and we were able to produce a nice finish and she looks like having a good spring ahead of her,” McEvoy said after the victory.

“She showed good quality at two and it’s always pleasing to see them come back and do it at three.

“She’s a racehorse, that’s what she is.”

“That’s really only her second preparation…it’s good to see her back.

“She got back in the field, she was three wide, so that was a good effort.

“She came back in terrific order.”

Next-up the Quezette Stakes winner could head to Flemington for a look at the famous straight track on Makybe Diva Stakes Day, September 14, for the Listed $140,000 Cap D’Antibes Stakes (1100m).

Her performance in that could determine whether the team then target the Group 1 $1.5 million Coolmore Stud Stakes (1200m) back at HQ on November 2 on the opening day of the Melbourne Cup Carnival, also won by Sunlight last year.

Alternatively, Exhilarates could be tested over further and stepped-up in distance at Caulfield on October 12 in the Group 1 $1 million Schweppes Thousand Guineas (1600m).

All-in Thousand Guineas markets at Ladbrokes.com.au list the filly as a $15 shot, while Lyre remains the $11 co-favourite with dual Group 1 runner-up Loving Gaby.