An early retirement from racing is likely for Brian Smith’s Rip Van Winkle filly Belle Roc who was scratched from the Group 1 $500,000 Treasury Brisbane Queensland Oaks (2200m) due to an injury sustained at trackwork on Friday morning. 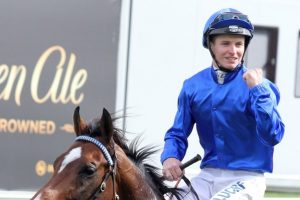 In a blow for Eagle Farm horseman Smith, the three-year-old suffered major sesamoid trauma that has forced her out of a shot at Group 1 glory at Doomben on Saturday.

The injuries, which came about during a light track gallop, look severe enough to stop Belle Roc from racing again.

The filly, who sat at around $20 in Queensland Oaks betting markets at Ladbrokes.com.au pre-scratching, will undergo surgery this morning on a day where she should have been lining-up in the latest Brisbane Winter Racing Carnival feature.

What has turned out to be the likely swansong run for the filly was a game fifth when only one and a half-lengths beaten by the winter Etana in the Group 2 $200,000 The Roses (2000m) at Doomben on May 18.

The Ciaron Maher & David Eustace-trained Shamus Award filly Etana chases The Roses – Queensland Oaks double today and is at $7 to salute in the second leg.

The scratching of Belle Roc from the official Queensland Oaks field sees the first emergency On The White Turf gain a start from a wide gate (12).

Gun hoop James McDonald partners the Richard & Michael Freedman-trained daughter of Savabeel who is out to improve on her lead-up ninth in The Roses.

“It’s a terrible situation for all the connections involved when this sort of thing happens, you don’t like to be getting starts in races under those sort of circumstances,” On The White Turf’s co-trainer Michael Freedman told Sky Sports Radio.

“On The White Turf has been just ticking along since The Roses under the same sort of preparation she would have had anyway.

“Now that she has got a run she is ready to go.

“Her Roses run was a much better run than maybe it would have looked on paper, she drew a horrible gate – we made the plan to roll forward from there but I think with the benefit of hindsight that probably wasn’t the best way to go.

“She got a bit too keen and raced on top of a very hard speed and did a good job to show a bit of kick at the top of the straight and then just weakened the last 100m or so which was to be expected.

“I know James [McDonald] under the circumstances was very pleased with how she went and felt if she could get a much softer run in the Oaks she could run well.”

McDonald was originally listed as the Queensland Oaks jockey for the Chris Waller-trained Duchess Of Lennox.

One of four Queensland Oaks starters for the leading Sydney-based trainer, who chases an incredible fourth win in five years, Duchess Of Lennox will now be ridden by two-time Melbourne Cup winning rider Corey Brown.

Ladbrokes.com.au have the consistent Reliable Man grey as a $13 chance to hand Waller back-to-back Queensland Oaks trophies after his success with Youngstar in 2018.

Duchess Of Lennox comes off a close second over 2000m at Doomben from May 18 in a Benchmark 75 Handicap, but has work to do from the extreme outside barrier in the Oaks (16 of 16).

On The White Turf meanwhile is rated a $19 chance in the updated Queensland Oaks odds, which are led by firming favourite Princess Jenni ($2.60).

Jumping from barrier seven with Damien Oliver aboard, David Brideoake’s High Chaparral filly Princess Jenni chases her fourth win on the trot and an interstate Group 1 double after a lead-up victory in Adelaide’s Schweppes Oaks from May 4.