March 30, 2019 by Thomas Hackett
Home > Queen Of The Turf Stakes An Option For Invincible Gem After Emancipation Stakes

Invincible Gem set-up herself up for a tilt at 2019 Queen Of The Turf Stakes at Royal Randwick in a fortnight following her win in the Emancipation Stakes at Rosehill Gardens this afternoon. 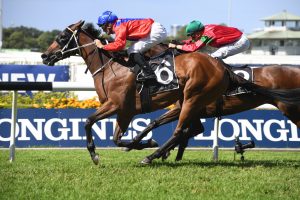 Invincible Gem returned to winning form in the Emancipation Stakes at Rosehill Gardens this afternoon. Photo by: Steve Hart

The lead has been the place to be at Rosehill Gardens this afternoon and it was no surprise that there was plenty of pressure in the early stages of the Emancipation Stakes.

Corey Brown on Invincible Gem eventually allowed Daysee Doom to take up the running and that proved to be a winning play as Invincible Gem stalked the leader and finished over the top of her rival late.

Brown admitted that Invincible Gem did plenty of work in the early stages of the Emancipation Stakes and was quick to pay credit to the toughness that she showed in the concluding stages.

“I had to work hard in the first two furlongs,” Brown said.

“Once we got to the front, we did slow up noticeably, but we had done some work getting there.

“I held on to her for as long as I could in the straight and I just let her down late.

“She was starting to wander late and she needed the line, but full credit to Kris and his stable.

“I think she has been a little bit luckless at her past few starts and today she did get a bit of luck.”

Invincible Gem has been included in the nominations for the Doncaster Mile, Coolmore Legacy Stakes and the TJ Smith Stakes and Kris Lees stable representative Lucas Miller said that they will be keeping their options open with the daughter of I Am Invincible.

“The way the track’s been playing, and with this mare especially, hasn’t had a lot of luck at her last few runs so we took that out of the occasion,” Miller said.

“Obviously a very tough effort and she was really strong on the line still.”

“She’s always drawn a bad gate and had some bad luck but always run well and the rider’s always suggested that she’s going well within herself, just the results on the board haven’t been there to prove it.

“We will weight up all our options.

“Kris will come back and assess her after this weekend but there are plenty of options there for her, she’s a tough mare.”