Trainer Mark Newnham has his eyes on next autumn’s Doncaster Mile during ‘The Championships’ with his progressive miler Quackerjack who won a ballot free ride into the classic via Saturday’s 2019 Villiers Stakes. 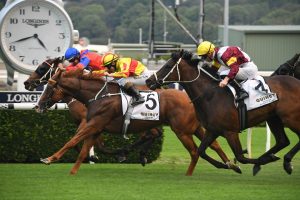 Four-year-old Not A Single Doubt gelding Quackerjack didn’t have the luxury of a big margin on the line, but he showed a terrific tenacity and will to win once again fighting off the Kris Lees-trained mare Invincible Gem in the Group 2 $250,000 Villiers Stakes (1600m).

Winner of the Goulburn Cup (1400m) in early November, Quackerjack was just beaten last start at Kembla Grange in the inaugural edition of the $1 million The Gong (1600m).

After a freshen-up, the improving chestnut and jockey Rachel King combined again this time as the firming favourite in the Villiers Stakes at Royal Randwick.

“He must be close to being the toughest horse in training,” King said of Quackerjack after the race.

“He had to work harder than I expected to get to the front and he doesn’t know how to lie down.”

Adding to his outstanding record over the Randwick mile, Quackerjack saluted over the track and distance for a third time having to dig deep in the closing stages of the Villiers.

King was caught deep early in the race before going to the inside to take up the front running.

Leading down the straight, Quackerjack looked to be cruising before the challenge came from the 59kg topweight Invincible Gem.

She tried her heart out under the big weight, but it was Quackerjack who came away victorious by the bob of the head.

“She thinks she won, I thought she won. We didn’t get the bob but very proud of her,” jockey Hugh Bowman said of Invincible Gem.

In third rounding out the trifecta was the Chris Waller-trained Sambro second-up who, like Invincible Gem, charged home well late from a midfield position.

Sambro was ridden by James McDonald who was full of post-race praise for the comeback galloper, the Fastnet Rock five-year-old having just his third run of the year.

The horse was second in last summer’s $1 million Magic Millions Cup (1400m) at the Gold Coast and is again eyeing the Restricted feature on January 11 this year.

“He’s not far off the mark. There’s a nice race (Magic Millions Cup) on the Gold Coast in January for him,” McDonald said.

As for Quackerjack and next April’s Group 1 Doncaster Mile (1600m), Newnham was keen to give the horse a shot with the Villiers Stakes winner likely to get in on a nice light weight.

“He gets the free kick now and he goes in wet and dry with only about 51kg so it’s worth having a throw at the stumps,” he said.

“Everybody loves him because he tries so hard. He gets out and does all the work himself.”

Doncaster Mile 2020 odds at Ladbrokes.com.au have firmed on Quackerjack in from $51 to $31.