The money proved right on Saturday as Kerrin McEvoy and the Jamie Richards trained Probabeel took out the Group 3 Bill Ritchie Stakes (1400m) at Royal Randwick.

The mare by Savabeel was backed into $2.45 right before the jump and raced every bit like a favourite under McEvoy, who scored his 350th black type win in Australia.

The champion hoop found a handy position early on in the outside of Nash Rawiller and Brandenburg, before racing away from the pack to run down the leader Cuba, who did well to finish second after dictating from the front.

Probabeel had been freshened for Saturday’s race after finishing runner-up to Roheryn in the Group 3 Show County Quality (1200m) first-up last month. 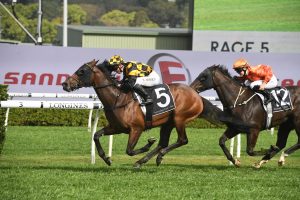 A trial between runs proved the trick as the team now set their sights on winning a second Group 1 with their promising mare in the 2020 Epsom Handicap.

“She’s a lovely mare to ride and she’ll go out to the mile now and prove very hard to beat in the Epsom. She’s got a nice weight on her back in the Epsom, they are obviously very competitive, but she goes there with a great chance, she still has a nice improvement to come out of this race today.”

Probabeel, who won the Group 1 Surround Stakes back in February, looks well-suited to the mile in the $1 million feature on October 3.

Despite Saturday’s comfortable win, Ladbrokes bookies have still offered up plenty of value with Probabeel now the $8.00 co-favourite alongside Funstar.

Cuba did well to hold on for second in his first run back from a spell, while Brandenburg, who finished third, looked much-improved after finding things tough in the Winx Stakes last month.

There was no such luck for Roheryn, however. The Godolphin five-year-old never looked a chance settling towards the rear of the field and seemed to struggle to make up ground down the straight.

If you’re looking to get in early on the Epsom, Ladbrokes’ complete All-Ib market can be viewed here.