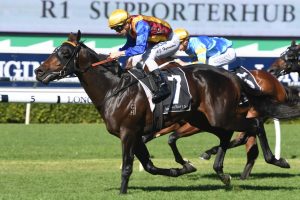 Trainer Anthony Cummings is bullish over the chances of his gun two-year-old at Eagle Farm in the juveniles’ feature on Stradbroke Handicap Day and is tipping even bigger things to come for Prince Fawaz.

“The world is his oyster really – next season you can pick out any three-year-old race on the programme and set him for it and he would be competitive,” Cummings told Racenet this week.

“But he is already a very serious horse.

“He has got a nice lopey stride and he has got a good turn of foot with it, which is what makes him a Group 1 horse, but he also gives every impression of being able to get out to at least a mile and a quarter [2000m] in the future.”

The progressive bay broke his maiden status at career start number four on May 25 at Randwick when carrying 55kg to a 1.3 length victory over the Chris Waller-trained Reloaded in a two-years-old 1400m handicap.

At the time, Snitzel colt Reloaded was previously undefeated and was leading early markets for the following month’s J.J. Atkins Plate in Queensland before going down to Prince Fawaz who overcame a troubled run to win.

“He showed himself up properly at Randwick the other day, albeit off two severe checks on the turn in an important part of the race,” Cummings said.

“To be able to regather and go along and run as well as he did speaks really well of his headspace certainly and also of his ability.”

The J.J. Atkins will be the second Group 1 start for Prince Fawaz who ran four lengths back fifth in April’s Champagne Stakes over the mile behind Castelvecchio.

He gets back out over the 1600m this weekend and is listed as the current $4 favourite through Ladbrokes.com.au in all-in J.J. Atkins betting.

Cummings believes the wide barrier eight (of 12) draw beat Prince Fawaz in the Champagne Stakes when the colt managed to run far better than his $51 odds suggested.

The galloper was also luckless barrier-wise on debut at Gosford on April 10 when 2.2 lengths back fifth from gate 10 of 11.

Prince Fawaz’s other career run was a third at Newcastle over 1400m on May 7 when jockey Tommy Berry went back from yet another nasty gate (10 of 13) and couldn’t make up the ground to win.

“He was the victim of barriers his first two runs and then Tommy belted himself up for the race at Newcastle,” Cummings explained.

Mark Newnham’s Pierro gelding Shadow Hero subsequently franked the form out of that Newcastle maiden, the runner-up taking out last Saturday’s Listed $125,000 The Phoenix (1630m) at Doomben on Oaks Day.

Prince Fawaz was given a gallop at Eagle Farm on Tuesday morning to keep him fit and gave Cummings every indication of being ready to race on Saturday.

“He had a bit of a cook’s tour this morning, a bit of a look around,” he said.

“Fitness wise he is where he needs to be. It was more a look at the track and a look at some new surroundings.

“He has coped with everything really well since his last run, and the travel.

“He lost a little bit of weight on the trip up, as they all do, but he is getting it back on now.

“As usual, he has taken all things in his stride.”