Godolphin-raced Hanseatic has firmed notably in futures markets on the Group 1 $1.5 million Neds Blue Diamond Stakes (1200m) with a runaway win in the Blue Diamond C&G Preview at Caulfield on Saturday. 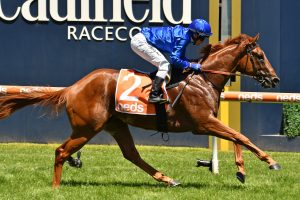 Jumping at short odds following his eye-catching Listed Merson Cooper Stakes (1000m) at Sandown in November, Hanseatic looked even more impressive fresh in the Blue Diamond lead-up where he overcame a wide run without cover.

Further franking the Merson Cooper form following the Magic Millions Classic win by Away Game who ran fourth to Hanseatic in the spring showdown, the Anthony Freedman-trained chestnut was given a patient ride by Luke Currie.

Currie allowed the horse to get out and relax, guiding him around the corner before Hanseatic showed off his brilliant turn of foot charging to the front over the final furlong to demolish his rivals.

“He put it away in about 10 strides,” Currie said.

“It was a pretty big effort.

On the line Hanseatic had two and a half lengths to spare over the Robbie Griffiths-trained runner-up Glenfiddich, with the Lindsay Park-raced Fixated finishing third on debut.

Hanseatic handed Freedman with back-to-back wins in the race following his success in 2019 with I Am Immortal who only managed to finish seventh to stablemate Lyre in last year’s Blue Diamond Stakes results.

The bookies are tipping this year’s Blue Diamond Preview winning colt to be a far more competitive force than that in the Group 1 on February 22 with Hanseatic firming in from $10 to $3.40 at the top of all-in Blue Diamond Stakes odds at Ladbrokes.com.au.

Freedman confirmed plans to head into the big one via another lead-up run in the Group 3 $200,000 Blue Diamond Prelude over 1100m on February 8.

“That’s what you want to see,” Freedman said.

“Obviously going forward to bigger races you want to see them put up a performance like that and put themselves ahead of them in an emphatic way.

“He’ll improve off today. He was a bit fresh and I’ll probably run him again in two weeks in the Prelude because of that.

“I think this colt might need the racing and the getting used to the routine of race day, hopefully that will improve him.”