The Ciaron Maher & David Eustace-trained Prague continued his 2020 Golden Slipper bid at Randwick on Saturday with an effortless win in the Group 3 $160,000 Canonbury Stakes (1100m). 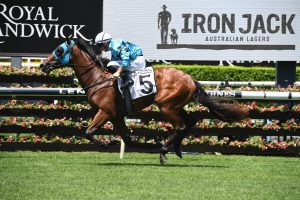 One race earlier his Magic Millions Classic winning stablemate Away Game dug deep for a tenacious win in the Group 3 $160,000 Widden Stakes (1200m) to earn her spot in the Group 1 $3.5 million Golden Slipper Stakes (1200m) at Rosehill on March 21 alongside the also Maher & Eustace-trained favourite Cellsabeel who returns to racing at Warwick Farm in next weekend’s $2 million Inglis Millennium (1100m).

The world-famous Golden Slipper is also on the cards for valuable stallion prospect Prague, a $1.6 million yearling buy at last year’s Gold Coast Magic Millions sales, after the Redoute’s Choice colt made it two-from-two in the Canonbury.

“I was a little bit anxious before the race because I thought he might have just had that X-factor,” co-trainer Maher told the media post-win.

“With the shades on and the way he had come on in the coat from his first-up run, there was a bit of timing about him.

“He will take a lot from that today. He actually pinned the ears back and started to work out what it is all about.

“He is a beautiful colt with an extremely bright future.”

On debut the progressive bay won a two-years-old maiden over 1200m at Canterbury on January 17 and he was far too good for his rivals carrying just 54.5kg on Saturday over the 1100m.

Ridden to victory by Tom Marquand, the international hoop having also guided Away Game to her big Widden Stakes win, Prague was called upon over the final furlong.

Settled just off the speed set by Team Snowden’s frontrunner Nitrous, Prague showed a nice late turn of foot to run down those in front.

On the line he had two lengths to spare over Chris Waller’s returning Group 3 Breeders’ Plate winner Global Quest with the Gerald Ryan-trained Fastnet Rock colt Return With Honour in third.

When asked to compare the two’s Golden Slipper prospects, Marquand said Prague could be the one with more upside.

“Obviously the filly has probably shown some of her best hand already,” the Englishman said.

“But this lad has a hell of a lot of improving physically and mentally.

“They are two very nice horses going places and Ciaron has a stable full of good two-year-olds who are extremely well managed.”

Prague is looking to become the fourth horse in history to complete the Canonbury Stakes – Golden Slipper double along with: Fina And Dandy (1958), Sebring (2007) and Vancouver (2015).

The all-in Golden Slipper markets at Ladbrokes.com.au have firmed on Prague in from $34 to $17 to take out the world’s richest race for two-year-olds this Sydney Autumn Racing Carnival.