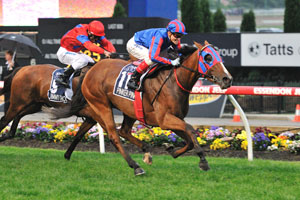 The four year old mare was a one of the chances in Saturday’s Group 1 $400,000  Inglis Queen Of The Turf Stakes (1500m) at Rosehill and Eurell was hoping she would bounce back to winning form after finishing sixth to Shoot in the Group 1 $350,000 Chipping Norton Stakes (1600m) at Warwick Farmon March 10

Pinker Pinker had earned over $2.5m in her career, mainly due to her win in the Group 1 $3m Tatts Cox Plate (2040m) when ridden by Craig Williams, beating Jimmy Choux and Rekindled Interest .

The Queen Of The Turf Stakes was to be Pinker Pinker’s third run back from a spell and Eurell was aiming her towards the Group 1 $2m Doncaster Mile (1600m) at Randwick on April 21.