Kiwi horseman Tony Pike has enjoyed another outstanding Queensland Winter Racing Carnival that wraps up on Saturday with his attempt at back-to-back Caloundra Cup Day wins with Terra Sancta. 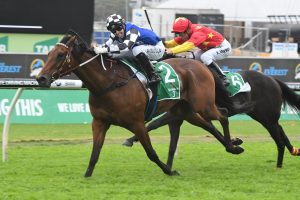 Last season the Cambridge-based trainer took out the Group 3 Sunshine Coast Guineas (1600m) with The Bostonian.

This weekend he returns to the track chasing the feature event – the Listed $175,000 Kendrick Racing Caloundra Cup (2400m) – with class mare Terra Sancta.

He was undefeated in the sunshine state until June 8 when he failed to come within five lengths of Trekking running a disappointing 11th in the Group 1 $1.5 million Stradbroke Handicap (1400m).

The Stradbroke result was not all bad for the stable however with Pike’s seven-year-old entire Endless Drama running third.

She has had two runs at the course for two wins, with her June 10 win there over 1800m last winter her last victory.

On Saturday she gets the chance to prove her staying potential despite being yet to win over further than 1800m.

“She’s unbeaten at the Sunshine Coast and seemed to love it down there last year,” Pike told The Informant last week.

Pike is likely to be dually represented on Cup Day at Caloundra with Shamexpress gelding Cyber Attack his other entry for the $75,000 Access Insulation Sunshine Coast QTIS 3YO Handicap (1200m).

The youngster has had a below par Brisbane campaign so far, including his dead last when ninth behind Vega One at Eagle Farm in last Saturday’s $105,000 Stella Artois 3YO Plate (1400m).

Prior to that Cyber Attack ran seventh in the Listed $125,000 Daybreak Lover Stakes (1200m) at Eagle Farm when finishing under three lengths off Signore Fox after a luckless run.

Original plans with the three-year-old included the Sunshine Coast Guineas in 2019, but connections have opted not to test him at the mile.

Instead Cyber Attack will drop back in distance to the 1200m, which he has a great of four wins and a second from six previous runs over.