The filly by I Am Invincible was the $3.10 favourite with Ladbrokes in the field of nine but had plenty of work to do down the straight with jockey Jean Van Overmeire and second elect See You Soon making things interesting over the final 100m. 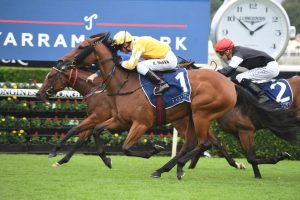 The Snowden stable had little to worry about with Dame Giselle having already booked her spot in the Golden Slipper with a win in the Golden Gift, but a fortunate bob at the line was an encouraging sign as Kerrin McEvoy earned his second Reisling win after claiming victory aboard Earthquake in 2014.

McEvoy’s work was particularly impressive after sitting three-wide the trip before moving up to join race leader Mildred at the furlong. See You Soon flashed home late along the rails, but the favourite’s turn of foot proved too strong in the end.

“She had to sit without cover but lucky they steadied up. She travelled well around the corner and then when we asked her she fought hard. The winner dived at me late but we were good enough to hold on. We knew she’d come on from the first-up run” McEvoy said.

Estijaab was the last filly to complete the Reisling Stakes – Golden Slipper double in 2018, and the bookies have reacted accordingly to Saturday’s win by firming Dame Giselle from $11 into $10.

Mildred, who finished strongly for third, also saw some love moving from $81 into $34, while See You Soon’s eye-catching run has seen her firm from $19 into $11 for the Group 1 Inglis Sires’ on April 4.