The last two winners of the $500,000 Ladbrokes Oakleigh Plate (1100m), Sheidel and Flamberge, are among the 2018 nominations for the Saturday’s Group 1 sprint at Caulfield. 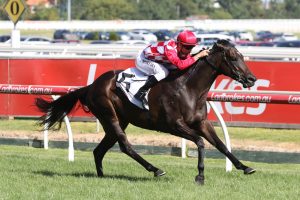 Sheidel will defend her title in the 2018 Oakleigh Plate. Photo by: Ultimate Racing Photos

Flamberge stormed home to nose out Fell Swoop in winning the 2016 Oakleigh Plate when trained by Peter Moody while the Lindsay Park Team of David and Ben Hayes and Tom Dabernig saddled up the speedy Sheidel for an all the way win last year.

Flamberge hasn’t won a race since from ten starts but is now under the care of Mathew Ellerton and Simon Zahra and has started to regain some form with a last start second to Super Cash in the Group 2 $200,000 Rubiton Stakes (1100m) at Caulfield on February 10.

The eight year old Group 1 winner is one of five sprinters that has been nominated from the Ellerton and Zahra stable, and is joined by Booker, Crystal Dreamer, Rock ‘N’ Gold and Sword Of Light in making up the total of 23 Oakleigh Plate nominations.

Sheidel is one of three sprinters from Lindsay Park that are nominated for the Oakleigh Plate, the other two are last year’s Ladbrokes Blue Diamond Stakes winner Catchy and the four year old Star Witness mare Fuhryk.

2017 Golden Slipper winner She Will Reign is another high profile name among the Oakleigh Plate nominations as is Russian Revolution and three times T J Smith Stakes winner Chautauqua from the Team Hawkes stable.

Early betting for the Ladbrokes Oakleigh Plate at Ladbrokes.com.au has the Peter and Paul Snowden trained Russian Revolution as the $5 favourite just ahead of She Will Reign at $6m, Booker at $6.50 and Snitty Kitty and Chautauqua at $9.