Jockey Damien Oliver continued his dominance in the Aurie’s Star Handicap in 2020 saluting aboard Home Of The Brave for Godolphin in a record fifth victory in the Flemington Group 3. 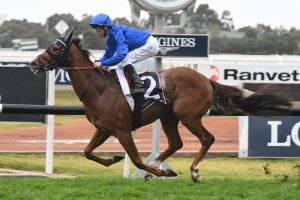 Oliver took his record up to four wins in in the past seven years taking out the Group 3 $160,000 Aurie’s Star Handicap (1200m) down the straight in a fighting finish with the beaten favourite Great Again.

It wasn’t the perfect start to the race for the imported nine-year-old son of Starspangledbanner, Home Of The Brave suffering a knock soon after the jump as the Lindsey Smith-trained Great Again veered to the left.

Oliver didn’t panic however, allowing the evergreen veteran to rebalance and settle third the outside of front runner Yulong January and Great Again who was up into second.

“I just got a bit sandwiched. I think he wasn’t brilliant away but the horse on the outside jumped in on top of me,” the Aurie’s Star Handicap record-holding hoop said of the early tussle.

“I got through that and then let him come to the outside of Great Again. It wasn’t too much of a disadvantage.”

In the final furlong, last start Group 3 Bletchingly Stakes third placegetter Great Again went for home up the middle, but was beaten to the line by a late-lifting Home Of The Brave who eventually won by three quarters of a length.

Catching the eye in third to round out the Aurie’s Star Handicap trifecta was Tony & Calvin McEvoy’s consistent Fastnet Rock four-year-old Game Keeper, the Adelaide Guineas winner looking set for a big spring.

It was an atoning result for Home Of The Brave who finished runner-up to the Oliver-ridden Voodoo Lad in the 2018 Aurie’s Star when debuting down under.

“He’s nine now so obviously he’s not getting any better but he’s holding his form,” Oliver said.

“He was well placed today, the reduction in the weights, and he’s got good form down the straight and the soft conditions, too. Everything went perfect today.”

So Si Bon was runner-up in the Group 1 $1 million Memsie Stakes (1400m) last spring following his Aurie’s Star Handicap success, the Caulfield feature on August 29 a potential next-up target for the best out of this year’s race.

“An unbelievable run from the horse,” Godolphin stable representative Sean Keogh said of Home Of The Brave after the race.

“He was very tough late, just a super win.”