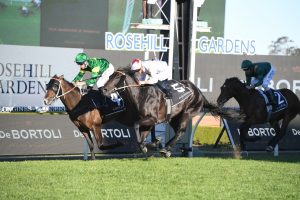 Ole Kirk, in green colours, and North Pacific, in white colours, fight out the finish of the 2020 golden Rose at Rosehill. Photo by Steve Hart.

Ole Kirk ($7) and North Pacific ($7.50) singled out to fight out the finish after both colts settled in the second half of the field.

James McDonald was first to challenge the leaders down the middle of the track while Tommy Berry had to find a gap in between runners on Ole Kirk.

The Team Hawkes pair came away to fight out the finish with Ole Kirk on the inside getting the judge’s decision by a nose over his stablemate.

The Team Snowden’s dual Group 1 winner King’s Legacy ($21) also ran home from the back to claim third prize just ahead of the odds on favourite Rothfire ($1.55) who had to do plenty of work in the early stages to cross to the front.

Rothfire was made to work for the lead after jumping from gate eight in the nine-horse field and that early effort took its toll in the straight and the Queenslander faded over the concluding stages.

Co-trainer Michael Hawkes, who trains in partnership with his father John and brother Wayne, said that he first focused on North Pacific coming done the outside before he saw Ole Kirk slicing though the middle.

“It is always hard. You always try and watch both horses. I could see North Pacific coming down the outside. To his credit he was very gallant in defeat,{ Michael Hawkes said.

“To put in the effort where he was to get back. Tommy just got held up. He had to wait for the right run. Probably that proved the difference.”

“Just by holding up. He was able to sprint that little bit better. They’ve streeted the rest. We’ve always had two really good colts. We’ve tried to separate them going forward. Obviously this is the Grand Final. To run one-two. Fantastic effort.”

“With the hype on these horses. If you go back and look at Ole’s record it is absolutely outstanding. He’s a stakes winner. King’s Legacy beat him ¾ length. He’s just got better.”

“I said to Neil Werrett (Owner) before the first run, that the horse was going very good. As good as he’s ever gone. He’s from the All Too Hard, Black Caviar family – it just doesn’t get any better. He is going to excel further. Look out Caulfield Guineas.”

“It is all about these colts. That is what we love doing. We exceed at it. We aren’t flamboyant about it, we are reserved and get on with the job and know what has to be done. It is a team effort. It is all the staff, jockeys, trackwork riders to get it to come together on the day. To have a stable full of colts is what we love doing.”