Straight track specialist Zoutori added to his outstanding CV down the 1200m at Flemington on ‘Super Saturday’ carrying the 57kg topweight to victory in the Group 1 $1.25 million Newmarket Handicap (1200m). 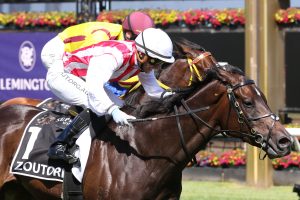 Zoutori was impressive carrying the 57kg topweight to victory in the 2021 Newmarket Handicap on Super Saturday. Photo: Ultimate Racing Photos.

The Mathew Ellerton & Simon Zahra-trained Zoustar five-year-old was the only horse out of last year’s race to return for another go in the Newmarket this Melbourne Autumn Racing Carnival and proved his class with the gutsy win.

It was the inside pack of four that held the advantage in this year’s event run on a Good track with another son of Zoustar, the Neville Parnham-trained Perth raider Indian Pacific, leading them around.

Zoutori and jockey Luke Currie, winning hoop in this year’s Group 1 Blue Diamond Stakes, got a lovely trial on the front-runners back and were able to make their move in the closing stages.

The two sides merged at the 500m with Indian Pacific up the middle looking to go all-the-way before being headed by last year’s fourth placegetter Zoutori with 250m left to run.

Digging deep, Zoutori was carrying two kilos more than his 55kg last year and was able to improve his unplaced Group 1 Oakleigh Plate performance last start to take out the time-honoured sprint feature.

Indian Pacific was brave holding onto second ahead of the Ciaron Maher & David Eustace-trained Star Witness colt Amish Boy who was down in distance running under a length back for third.

“He’s really come on really well, the only thing in the back of my mind was drawing (barrier) four but Luke gave him a great steer,” Ellerton told Racing Victoria post-win.

“He’s just a good, tough, honest sprinter. He’s a dual Group 2 winner, now a Group 1 winner and he’s got a great CV, especially down the straight.

“It’s on our doorstep (this race), it’s a time-honoured sprint, we’re just chuffed to win the race.

“His CV down the straight is exceptional.”