Neorealism won’t be taking on Winx in 2017 Cox Plate 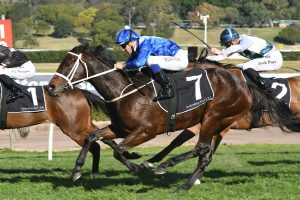 Neorealism will not head to Australia to take on Winx in the Ladbrokes Cox Plate. Photo by: Steve Hart

Racing Victoria’s International Recruitment Officer Leigh Jordon announced yesterday that the Japanese trained Neorealism is struggling with some fitness issues and won’t be coming to Melbourne for the 2017 Spring Carnival.

“He’s just had a few niggling issues so his trainer (Noriyuki Hori) thought that it wasn’t the right move to put him on the plane and go through quarantine.

“It’s unfortunate because the connections were very keen to come to Melbourne.”

The Noriyuki Hori trained seven year old showed his credentials at the highest level with a last start win in the Group 1 HK$20,000,000 The Audemars Piguet QEII Cup (2000m) at Sha Tin in Hong Kong on April 30 with the magic man Joao Moreira in the saddle.

The Chris Waller trained Winx is the winner of the last two runnings of the Ladbrokes Cox Plate and is a $1.50 favourite at Ladbrokes.com.au to make it three wins in a row in the ‘Weight For Age Championship’.

Winx is also well into the red at $1.10 for the Group 1 $500,000 Colgate Optic White Stakes (George Main Stakes) (1600m) at Randwick on Saturday as she chases her twentieth win in succession.

Winx is likely to have one more run after the George Main Stakes as her final lead up to the Cox Plate with Waller still undecided if she will stay in Sydney for the Group 3 $500,000 Craven Plate (200m) at Randwick on October 14 or head to Melbourne on the same day for the Group 1 $1m Ladbrokes Caulfield Stakes (2000m) at Caulfield on the same day.

“We have planned her program to miss a race and it would likely be the Hill Stakes,” Waller said.

“Missing a race doesn’t concern me as much as over-racing her.”