The Ladbrokes Cox Plate favourite Mystic Journey kicked off her spring campaign with a Caulfield victory taking her winning streak to seven on the trot in the Group 2 $200,000 P.B. Lawrence Stakes (1400m). 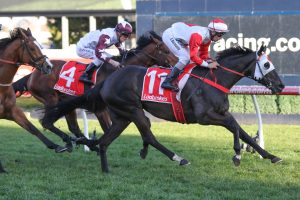 The punters shied away from Adam Trinder’s gun Tassie-trained mare with the returning Australian Guineas – All-Star Mile winner easing out from odds-on territory to $2.10 by the jump in the weight-for-age feature.

She rewarded the early money however going through the gears for a Soft win in the P.B. Lawrence Stakes with hoop Anthony Darnamin continuing his association with the Needs Further four-year-old.

“It’s really pleasing to get them back to the races and see them do what you trust they’re going to do.”

Mystic Journey settled fourth the fence in the P.B. Lawrence Stakes racing closer to the speed as expected with the field led around by the Ciaron Maher & David Eustace-trained Cliff’s Edge.

The fit horse in the race coming off a first-up third in the Group 3 Bletchingly Stakes (1200m) at the track on July 27, Cliff’s Edge led into the turn.

The challenges came from evergreen Godolphin warhorse Hartnell, who won the event in 2017 and ran second last year, and Mystic Journey who was quickly winding up having gone to the outside.

Mystic Journey moved up and raced past nine-year-old Hartnell and then overtook Cliff’s Edge, the classy mare hard to beat once she hooked to the middle of the track.

She boasted a comfortable three-quarter length margin over Cliff’s Edge, who was brave in defeat, on the line with Hartnell his usual honest self in third.

“I thought she was great there today, she was soft,” Trinder said.

“She still showed will and determination, that’s going to hold her in really good stead moving forward this preparation.”

A winner over well over $3 million in prize money over her 14 start career that now features 11 wins, Mystic Journey confirmed her pre-field favouritism at $4.50 through Ladbrokes.com.au for the upcoming Group 1 $5 million Cox Plate (2040m).

The Ladbrokes-sponsored event runs at The Valley on October 26 and with four-time Winx now in the breeding barn, looks the ideal race for Mystic Journey who took out the Moonee Valley Fillies Classic on the same day last season.

Trinder said ideally they would give Mystic Journey a month between runs and head towards Flemington’s Group 1 $750,000 Makybe Diva Stakes (1600m) second-up.

He added however that the team would assess how she pulled up and give consideration to an earlier run back at Caulfield on August 31 in the Group 1 $1 million Memsie Stakes (1400m).

“The Memsie in a fortnight is a Group 1 target and can’t be taken lightly, but we’ll do what’s right by the filly and my feel is a month between runs and just the three runs leading into the Cox Plate,” he said.

Mystic Journey has firmed into $2.50 favouritism in pre-field odds on both the Memsie Stakes and Makybe Diva Stakes through Ladbrokes.com.au.