The world’s richest turf race could be on the spring agenda for Joe Pride’s recent stable acquisition Eduardo who put his hand up for a potential slot in The Everest 2020 winning the Group 2 $200,000 Missile Stakes (1200m). 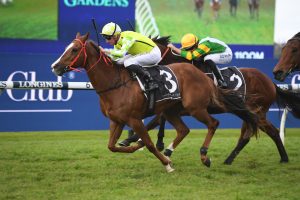 2020 Missile Stakes winner chases a slot in the $15 million The Everest this spring. Photo: Steve Hart.

As is becoming the new season trend for any sprinter coming out to win a feature race, Eduardo was named by Pride following his gutsy Missile Stakes win in the wet at Rosehill on Saturday as a genuine chance for the $15 million The Everest (1200m).

In the race prior, the Ciaron Maher & David Eustace-trained colt Anders won the Listed $140,000 The Rosebud running away and was subsequently tipped as the horse to fill the Aquis Farm slot in The Everest field.

Other slot holders were then called to attention by Pride after the Missile Stakes as Host seven-year-old Eduardo saluted for the punters holding off the resuming Thousand Guineas winner Flit in a fighting finish.

“He was good. The horse has got a bit of fight in him. He’s a good horse as he’s able to make his own luck up on speed and he’s got a good kick,” Pride told Sky Thoroughbred Central after the win.

“I’m just waiting for a call from a slot holder.

“I think he’s a really good sprinter and he’s shown in his two runs here he can, one, run 1200 metres and, two, he’s adaptable.

“I think he’d be really hard to beat.

“He is an exciting horse…on real terms he’s a lot younger than seven so there’s plenty of horse left in him.”

Jockey Nash Rawiller pinged the gates on Eduardo, who he rode to victory in the July Sprint last start when the galloper debuted for the Pride stable, and took up front running.

Quick to settle in a comfortable position, Eduardo lost his way a little racing wayward on the home straight but had the fitness edge and tenacity to hold on and defeat the James Cummings-trained Flit by one and a half lengths.

“He’s got a motor,” Rawiller said.

“He showed exceptional speed out of the gates today and got into his comfort zone quick.

“He got really lost in the straight…but once inside the 150m he really let down well and was strong over the line.

“He come here underdone the other day and he’s taken natural improvement off that.”

After a luckless run down the home straight, Imaging from the Chris Waller stable rounded out the Missile Stakes trifecta finishing a neck back for third first-up.

The disappointment of the race was resuming 10-time Group 1 winning Kiwi mare Melody Belle, unsuited in the end and never making up ground finishing dead last in her spring return.

Futures betting on The Everest at Ladbrokes.com.au has Eduardo as a $31 chance in markets dominated by Nature Strip, while Pride also chases a slot for his classy mare Fasika ($51).

Cummings won the Missile Stakes last year with Alizee (2019) and was happy with the second placing by Flit, adding their decision to scratch Savatiano was also the right one.

“Brilliant return from Flit but a clever ride on the winner,” he said.

“I am glad we didn’t run Savatiano, we made the right decision with her.