Matt Laurie’s lightly-raced colt Portland Sky has added a Group 3 win to his resume by taking out Saturday’s Red Anchor Stakes (1200m) on a wet day at Moonee Valley.

The son of Deep Field enjoyed a perfect ride from the in-form Ben Melham as the pair went straight to the front on the rain-affected track to lead from barrier to box.

Saturday marked Portland Sky’s first run in the wet, which did leave punters feeling a little wary with the market price drifting out to $4.60 before the jump.

According to Melham, Laurie also had some reservations on Saturday morning with the track downgraded to a Soft 7, but fortunately the champion jock was able to talk him into running.

“I actually had to talk him to running this horse because he texted me at 9:30am and said he might scratch her and I said ‘don’t you dare’, so thankfully he didn’t” Melham told racing.com. 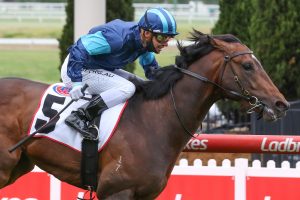 The three-year-old was having just his fourth run on Saturday but always looked a decent each-way bet coming off a strong performance when fourth behind September Run in the Listed Poseidon Stakes (1100m) last start at Flemington.

Melham said afterwards that he always thought the horse would be better over further and that the win bodes well for his future.

“He’s a lovely colt. He did a good job to win actually, he’s got good gate speed and his runs have been good in his first preparation, I just felt he’s really been looking for the 1200m” Melham said.

“He got up to the lead comfortably and then he got absolutely pestered for 200m, and in this tough going today, it was a good solid performance from this colt.”

Laurie could choose to backup in next week’s $1.5 million Coolmore Stud Stakes (1200m), but without a nomination in the Group 1 feature, it appears the winning trainer isn’t prepared to make a decision just yet.

“We’re not nominated, obviously just see how he pulls up, but very mindful it’s his first preparation and we want to be looking after him. It may not be the right thing, but if he was jumping out of his skin, you never know” Laurie said after the race.

Race favourite Bella Nipotina did well to run second after finding herself three wide at the turn, while Godolphin’s Valaquenta lost no admirers running third.