Mawingo Ruled Out Of Spring

Having already lost Melbourne Cup placegetter Lucas Cranach to injury prior to the spring, the bad luck has continued for Anthony Freedman with Mawingo set to miss the rest of the spring after contracting a virus. 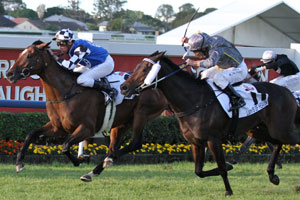 Mawingo (blue) has been ruled out of the spring. Photo by: Daniel Costello.

The German import claimed the Group 1 Doomben Cup (2000m) in the winter and was considered to be a Caulfield Cup contender prior to the spring but produced poor performances in both the Makybe Diva Stakes and the Underwood Stakes.

Initial tests failed to reveal any abnormalities but it became known recently that the four-year-old was suffering from a virus.

“His past two runs were below par, but the blood tests failed to show up anything,” Freedman said on his website today.

“But a recent test showed he has a virus in his system, which needs to be treated. At this stage of the spring, it is fruitless continuing.

“He can have the rest of the spring in a paddock, and we will bring him back in the autumn, along with Lucas Cranach, who is recovering well from his bone-chip operation.”

Freedman is now without any runners in the spring’s major feature races.