Mark Zahra is the new rider for multiple Group 1 winning mare Mosheen at Flemington tomorrow after regular rider Danny Nikolic’s appeal was put back to next Wednesday. 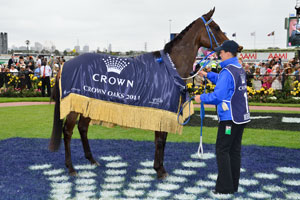 Mosheen will be ridden by Mark Zahra in the Group 3 Bobbie Lewis Quality at Flemington. Photo by: Taron Clarke

Nikloic failed to get a stay of proceedings when he fronted the Racing Appeals and Disciplinary Board on Wednesday after being stood down from riding indefinitely by Racing Victoria’s Chief Steward Terry Bailey after an incident at the Seymour race meeting on Tuesday.

The embattled jockey was hoping to gain a stay to be able to ride quality mare Mosheen in her come back race for the Spring on Saturday, but with that denied, his next avenue was to face the full Appeals Board and after initially being set down for Friday, the appeal time was transferred to next Wednesday.

The outcome of next week’s hearing will then determine if Nikolic will be able to resume his association with Crown Oaks winner for the remainder of the Spring or if his riding career is in limbo.

At Seymour on Tuesday Bailey informed Nikolic that he was stood down from his remaining rides for the day and indefinitely after the jockey allegedly directed comments to Bailey on his way to barriers before the running of race 6, which the chief steward took as a threat.

“Keep your eyes on the road, Terry,” Nikolic allegedly said.

Bailey reportedly told jockeys at the race meeting that Nikolic had threatened him, his family and his career and an inquiry will be launched into the incident.

“What I said was no threat,” Nikolic said.

“I didn’t threaten him.”

Nikolic has been aboard Mosheen for thirteen of her fourteen starts and has collected four Group 1s on the Fastnet Rock mare, including three in the Autumn this year.

The Robert Smerdon trained mare sprang into the spotlight with a nine length demolition of her opposition in the Group 1 $1m Crown Oaks (2500m) at Flemington on November 3 after finishing second to the unbeaten Atlantic Jewel in the Group 1 $500,000 Schweppes Thousand Guineas (1600m) at Caulfield on October 12.

Smerdon has reported that Mosheen is back on track for the Spring heading towards a start in the Group 1 $3m Sportingbet Cox Plate (2040m) at Moonee Valley on October 27 after having to undergo a minor operation to rectify an epiglottic entrapment, a condition that affects the breathing.

“It is considered a routine procedure, they said there is a ten per cent chance they can re-entrap in the first couple of weeks so we’re passed all that and she looks good,” Smerdon said.

Mosheen will kick off her Spring campaign in the Group 3 $150,000 Bobbie Lewis Quality (1200m) at Flemington on Saturday with new jockey Zahra taking over from Nikolic who also rides the mare in plenty of her trackwork.

“Danny Nikolic has had a connection with her since the start of her career and he thinks she’s back to where she was in her work,” Smerdon said.

“She’s right back on track we think.”

Mosheen has been lumped with 59kgs first up in the Bobbie Lewis and is currently $6.50 second favourite behind the Mark Kavanagh trained We’re Gonna Rock at $4.80 with Shanghai Warrior next in betting at $7.