Trainer Ron Leemon is happy to wait another week to trial his stable star Manawanui in preparation for a Spring campaign which is heading toward a start in the Group 1 $3m Sportingbet Cox Plate (2040m) at Moonee Valley on October 27. 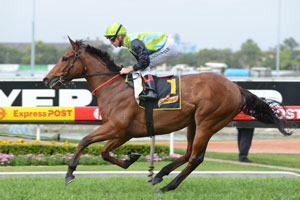 Leemon decided against trialling at Rosehill today after he was able to give Manawanui a solid hit-out on the course proper at Warwick Farm on Tuesday morning.

“I was allowed on the course proper to work him so we gave him a good solid hit-out there and I think it was enough for the week,” Leemon said.

“He’s still very big and he blew a lot and I’d like to bring him up nice and steady.”

Leemon is happy to take the four year old along nice and steady before he heads south for the business end of the Melbourne Spring Carnival and will more than likely follow a weight for age path on his way to the Cox Plate.

The Group 2 $175,000 Warwick Stakes (1400m) at Warwick Farm on August 25 is looking as the likely race to kick off Manawanui’s Spring program but Leemon said if the four year old wasn’t ready he wouldn’t be going around.

“At the moment we are looking at the Warwick Stakes and also Melbourne,” Leemon said.

“There is not much for him in Sydney in August and September but there are a lot of races in Melbourne.”

“I’ll have a good look over the next couple of weeks but I’m not really worried about where he starts first.”

Manawanui failed to live up to expectation in the Autumn after creating a huge impression in the Spring with a win in the Group 1 $1m Toohey’s New Golden Rose (1400m) at Rosehill on September 10 last year.

Leemon then ventured to Melbourne and the then three year old was beaten in a photo finish by Darley’s Helmet in the Group 1 $1m Caulfield Guineas (1600m) at Caulfield on October 8 before scoring as a short priced favourite in the Group 2 $200,000 Mitchelton Wines Vase (2040m) at Moonee Valley on October 22.

Manawanui was then sent for a spell after finishing sixth to Sangster in the Group 1 $1.5m AAMI Victoria Derby (2500m) at Flemington on October 29.

Racegoers failed to see the best of Manawanui in the Autumn when he was beaten three times as favourite, the latest when one and a half length fifth to smart Victorian filly Mosheen in the Group 1 $500,000 Turnpoint Royal Randwick Guineas (1600m) at Randwick on March 17.

Leemon then sent Manawanui to the spelling paddock with the Cox Plate firmly embedded in his Spring plans.

“The Cox Plate is the race we have always had in mind,” Leemon said.