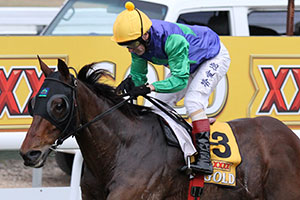 Lloyd’s decision in the early stages of the Cup to restrain Shamardashing and get the $3.20 favourite to settle behind the leaders proved the right one and the five year old had plenty in reserve when asked for his final effort at the 200m.

Shamardashing was able to stride clear half way down the straight to score a one and a quarter length win over stable mate Saint Encosta ($13), wrapping up the quinella for Patinack Farm in the feature race of the Grafton Carnival.

“I was actually in a nice spot but when they pulled up in front the horse behind the leader popped one off. They were just going a bit too slow and I was in two minds to move on or get him to come back to me. He was a little bit keen so I decided to try to get him to settle and managed to squeeze back in there,” Lloyd said.

Lloyd, who has tasted success on the international stage world-wide and has ridden at most of the world’s famous racecourses, said it was always nice to enjoy the feel of the popular country racing carnivals and wrapped up a double for the stable after winning the previous race on two year old Sookie.

“It was a nice to come here and win their cup race, it’s always special.  We all know you need the horse to win and you need a lot of luck,” Lloyd said.

Stable foreman  Brett Killion describes Shamardashing as a real warhorse after coming through the Brisbane Carnival with a couple of hard runs including a fourth to Ginga Dude in the Group 3 $200,000 Carlton Draught Tattersall’s Cup (2200m) at Eagle Farm on June 23 and his campaign might not be finished.

“His run last start was full of merit, he was wide the whole way and kept trying. Today he had a good run, he sprinted well and he put paid to them pretty easy,” Killion said.

“He’s a real warhorse. He could probably have another six runs this prep and he would handle it. He’s tough.”

Lloyd has settled into the role of stable rider for the Patinack team after recently relocating from Hong Kong and setting up base on the Gold Coast and produced a top ride to steer Pear Tart to victory in the Group 1 $500,000 Sky Racing Tattersall’s Tiara (1400m) at Eagle Farm on June 23.

The top jockey then made a dash to his native South Africa to try to win the Group 1 2200m Durban July at Greyville, a race that has eluded him in his illustrious career, but could only manage to finish third on Chesalon.