The landscape of The Everest has been turned on its head thanks to Libertini’s upset in Saturday’s Group 2 Premiere Stakes (1200m) at Royal Randwick.

Anthony Cummings’ four-year-old mare was installed as a double-digit chance in a field of two Everest slotholders, Nature Strip and Classique Legend, but that didn’t deter jockey Regan Bayliss as the winning hoop timed his run to perfection on the widest part of the track to record a comfortable two-length win.

Nature Strip got to the front early but seemed to lack his usual turn of foot on top of the ground before fading along the rails to run fourth. 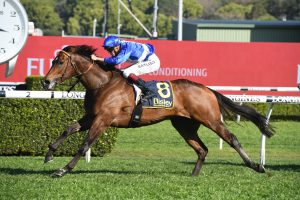 Libertini has firmed into single figures ahead of next fortnight’s $15 million Everest. Photo: Steve Hart.

Classique Legend looked the winner at the 250m after struggling to find cover, right before Libertini burst on to the scene to run down the grey in one of the upsets of the day.

“Classique Legend got caught a little bit wide, which probably worked in my favour a little bit. When Kerrin (McEvoy) slid up to get into the race a little bit I just got on his back and stalked him for as long as I could” Bayliss said after the win.

Cummings now plans to target the $15 million Everest in two weeks time at Randwick, and it appears bookmakers fancy him a chance with the odds firming from a whopping $34 into $7.

“Pretty exciting today and with a little bit of luck the phone might ring some time soon,” Cummings said when asked about earning a slot.

Libertini was first-up on Saturday and had won previously when racing fresh, making her a real threat heading into the world’s richest turf race in a fortnight’s time.

Nature Strip, meanwhile, had no excuses with the result posing a few questions heading into the Everest.