Star Newcastle horseman Kris Lees is eyeing the opening Group 1 race of the season with his duo Le Romain and Invincible Gem after they take on odds-on favourite Alizee in the Group 2 Missile Stakes (1200m) on Saturday. 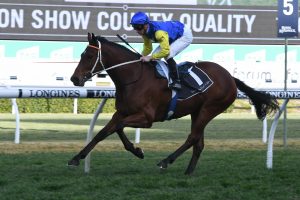 Le Romain is one of two Kris Lees-trained runners in the 2019 Missile Stakes this weekend. Photo: Steve Hart.

Lees has no doubt that the Godolphin-raced Alizee is the deserving odds-on favourite through Ladbrokes.com.au in a small five-horse field for the Missile Stakes in 2019 at Rosehill Gardens.

He remains hopeful however that the three-time Group 1 winning daughter of Sepoy may be challenged by his Missile Stakes duo first-up, despite the five-year-old boasting a three-from-four record when fresh.

“Most certainly they are [going under the radar],” Lees told Racenet.

“Le Romain, [Alizee] beat him twice last season so she is deserved favourite but if she has got any chinks my two will both perform well.

“Both have come up well but as they get a bit older it’s whether they are going to react first-up because sometimes they just need the run.

“They have performed well first-up previously.”

Lees’ veteran Hard Spun seven-year-old Le Romain, a winner of over $4 million in prize money to date, is tipped the most likely to challenge potential 2019 The Everest runner Alizee in the Missile Stakes paying $4 in the current markets.

He too resumes in the weight-for-age clash looking to go one better than his first-up second behind Alizee at the same track and distance back in February’s Group 2 Expressway Stakes (1200m).

Le Romain was also beaten two lengths by the mare next race when eighth in the Group 1 Futurity Stakes (1400m) at Caulfield.

Le Romain’s last was the close sixth when only two lengths off the winner Pierata from the outside barrier (13 of 13) in the Group 1 All Aged Stakes (1400m) on April 20.

“It’s been a blessing,” Lees said of the galloper’s subsequent time in the paddock.

“We considered going to Brisbane with him but he went the year before so we thought this year we would give him a break and get him up and going early.

“With no Winx around some of those weight-for-age races will certainly be a lot more even than they have been.

“It is a very competitive time though.”

Invincible Gem meanwhile is an easing $13 chance in Missile Stakes betting with the six-year-old daughter of I Am Invincible getting the rails run from barrier one.

She won the race back in 2017, defeating stablemate Le Romain, when it took place at Royal Randwick but was a recent Rosehill winner in late March taking out the Group 2 Emancipation Stakes (1500m).

Her latest start produced a 13th in the Group 1 Queen of the Turf Stakes (1600m) in mid-April when only three lengths beaten in a blanket finish.

Lees knows Invincible Gem has class on her day, but is also aware that she may find the 1200m short of her preferred distance.

“She obviously beat Le Romain a few years ago but her trials probably haven’t been as sharp as Le Romain. With that said she hasn’t had her blinkers on,” he said.

“She reacts very well when they go back on so whatever she does she will improve on as she gets into her prep.

All-in Winx Stakes 2019 odds at Ladbrokes.com.au currently have Le Romain and Alizee at an equal quote of $13.