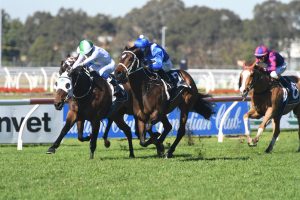 Laming is dually represented in this winter’s Grafton Cup field with the well-supported He Ekscels chasing a third straight win, while his stablemate No Money No Honey is also not without claims in the Clarence River Jockey Club feature.

“Both have a good chance and I am very happy with them,” Laming told Racenet ahead of having his first runner in a Grafton Cup.

“They both have very good form going into it and had a gallop together last Saturday. I couldn’t be more pleased with them.

“I have been to a couple of Grafton Cup carnivals, never had a runner in the Cup, but it is always a good carnival.

“It will be good to get back there.”

Ekraar five-year-old He Ekscels is rated a $6 chance in the current Grafton Cup odds at Ladbrokes.com.au with markets led by the Caloundra Cup winning mare Igraine ($3.20).

Six-year-old Host mare No Money No Honey meanwhile is at $12 following a string of good runs this campaign.

He Ekscels rises in class and distance this week on the back of a last start 2000m upset in the wet at Rosehill carrying just 51kg on June 29 to victory over the hot favourite So You Win.

The galloper relished a Heavy (9) track that day so will appreciate the soft conditions again at Grafton as he looks for his first victory over further than 2100m.

Daniel Griffin jumps aboard the gelding on Thursday with He Ekscels needing to show progression rising notably in weight up to 55kg.

“He was very tough to come back off the canvas on that day,” Laming said of the horse’s recent Rosehill triumph right on the line.

“It would be nice to get a soft lead in the race and get similar circumstances again.

“He handles the wet and that’s how it’s looking at the moment so that will help his chances as well.”

No Money No Honey gets in on the 54kg minimum with Tegan Harrison to ride from gate two.

The mare, while yet to win over greater than 1700m, looks a well-weighted chance at a good price following her last start third at Randwick’s Kensington track.

She charged home that day go down by just a quarter-length over the mile and a half on a Heavy (10) and will also enjoy the drop down in distance on similar ground for the Black-Type clash on Thursday.

“She loves the sting out of the track and she is thriving at the moment so it wouldn’t be surprising to see her run well again.

“She will run quite a good race. We will just sit off the speed with her like we normally do and let her finish off.

“This whole preparation she has continue to improve.”

The two-day Grafton Cup Carnival kicks-off on Wednesday with Ramornie Handicap Day followed by the marquee event on Thursday.