Lady Of Harrods Takes Out Thousand Guineas Prelude At Caulfield

September 22, 2012 by
Home > Lady Of Harrods Takes Out Thousand Guineas Prelude At Caulfield 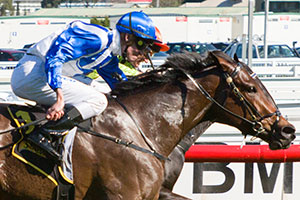 The Dubawi filly has now won three of her six race starts and has earned more than $140,000 in prize money during her horse racing career.

Lady Of Harrods won the race by a nose in front of Commanding Jewel, who led the field until the very final stages of the race.

Trainer Russell Cameron felt the performance in today’s Guineas Prelude was even better than her last start win in the Group 3 HDF McNeil Stakes on September 1.

“She was much better today I thought,” Cameron said.

“We really wanted to lead but too much pace so we just sat.”

Regular jockey Jamie Mott again missed the ride aboard Lady Of Harrod in the Thousand Guineas Prelude due to suspension.

He also was forced to stand down from her last start win for the same reason.

Stand-in rider Steven Arnold was thankful for being given the winning ride aboard the three-year-old.

Lady Of Harrods will now go to the Group 2 Edward Manifold Stakes at Flemington on October 6, before heading to the Group 1 Thousand Guineas on the 17th.

“With improvement she might be able to gone on,” Arnold said.

“You win (the Manifold), you’ve got to go (to the Thousand Guineas).

“If she gets same gate and good run there’s no reason she can’t pick them off.”

Lady Of Harrods was purchased as a weanling for just $4,000 from the Inglis Australian Weanling Sale in 2010, before being sold for $80,000 as a yearling seven months later.