New trainers Lee Freedman and Graeme Rogerson are hoping to see the ‘old’ Lady Lynette at Rosehill Gardens tomorrow as the former Tassie mare looks to return to form in the Civic Stakes. 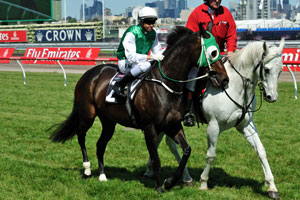 Previously prepared in the Apple Isle by David & Scott Brunton seven-year-old Ladoni mare Lady Lynette was transferred to the Randwick stables of Freedman and Rogerson earlier this year.

Under her old trainers the classy mare enjoyed 14 wins and 18 placings from 49 starts.

Her more notable wins included the Group 2 Blazer Stakes (1400m) at Flemington last October and the Group 3 Teiso Stakes (1600m) at Moonee Valley in the spring of 2010.

She also posted a Group 1 minor placing when running second to former Horse of the Year Typhoon Tracey in the 2009 Myer Classic for Smerdon.

In her debut for Freedman and Rogerson last time out Lady Lynette had a shocker finishing dead last when beaten seven lengths by Upon This Rock in the Listed Dark Jewel Classic (1400m) at Scone on May 19.

“Scone was a bit of a disaster, she really had no hope,” Freedman said.

Freedman & Rogerson are hoping to see great improvement from that run when the veteran looks to atone in the Civic Stakes this weekend.

“We just regrouped from that, got her back feeling good,” Freedman said.

“She had a trial last week, she trialled quite nicely (when third over 1000m at Randwick).

“On her best form she would be very hard to beat.”

Lady Lynette has a tough task however as she is installed as the 59kg topweight.

Drawn in gate two with Peter Robl to ride she has opened a $10 chance in the Civic Stakes betting markets which are led by recent June Stakes winning mare Alberton Park at $4.50 who will carry 55kg.

Lady Lynette also gives away plenty of weight to the likes of smart Elusive City three-year-old Famous Seamus and last start winner over the track and distance Ideal Position who occupy the second and third lines of betting and who are both on the 54kg minimum.

“She has to give weight to the field but she has earned that,” Freedman said.

“The draw is a big help, you get a cosy run and hopefully she can bounce back.”