September 19, 2020 by Mark Mazzaglia
Home > Kingston Town Stakes winner Taikomochi on target to give Waterhouse her 7th win in The Metropolitan

Tough stayer Taikomochi is on target to give Gai Waterhouse her seventh win in The Metropolitan after racing to a convincing win in the Group 3 $160,000 Schweppes Kingston Town Stakes (2000m) at Randwick today. 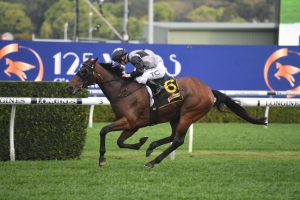 Taikomochi, above, scored a tough win in the Kingston Town Stakes at Randwick. Photo by Steve Hart.

Waterhouse has won six Metropolitans in her own right, dating back to Te Akau Nick in 1992, but if Taikomochio can take out this year’s trophy, it will be the first for her and co-trainer Adrian Bott together.

Taikomochi’s tough win today has seen his price plummet for the Group 1 $750,000 Heineken 3 The Metropolitan (2400m) at Randwick on October 3 and the seven year old is now a $15 chance at Ladbrokes.com.au.

The Kris Lees trained Mugatoo sits at the top of The Metropolitan betting at $3 after winning the Group 3 $200,000 Newcastle Gold Cup (2300m) at Newcastle on Friday.

Tim Clark let Taikomochi take up his usual on pace position and sat behind the leader Wu Gok who set a solid tempo.

Clark let Taikomochi ($9.50) stride to the front soon after heads were turned for home and the gelding proved to be the toughest stayer on the day.

Runner up Shared Amibition ($4.20 favourite) settled in the middle of he pack and tried hard in the straight with Brimham Rocks ($17) working hard to the line for third.

Co-trainer Adrian Bott said it was always the plan to race forward and he can’t see any problem stepping up to the 1400m of The Metropolitan.

“I don’t see that being a problem for him. He’s a fit horse. We gave him a really good grounding, a foundation leading into the Metropolitan. I think he’ll run it out strongly and is well weighted in the race,” Bott said.

“It was the plan to be positive early to control the race. There was some pace in the race. It worked out well for him. He looked to let down strongly with something to chase. Very satisfying to see.”

“So satisfying to see. Obviously so much respect for this horse. What he has achieved in his career. Still to be racing at this level at his age the manner in which he does. Such a tough horse. Very satisfying.”