Kementari Is The 2018 Hobartville Stakes Winner

Kementari stamped himself as one of the best colts in the country to win the 2018 Hobartville Stakes at Royal Randwick this afternoon. 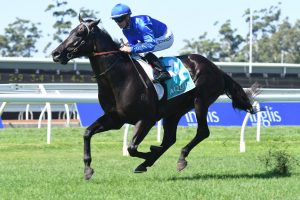 Kementari was too strong for his rivals to win the 2018 Hobartville Stakes. Photo by: Steve Hart

There was an early surprise in the Hobartville Stakes as Glyn Schofield elected to settle Kementari just outside the leader Trapeze Artist, while the likes of Pierata and D’Argento got a long way back.

Kementari didn’t let down as quickly as he did in the Eskimo Prince Stakes, but he still did enough to fight off Trapeze Artist and he never looked like being run down by the likes of D’Argento and Pierata.

Assistant trainer Darren Beadman revealed after the race that the decision was made to ride Kementari more aggressively in the Hobartville Stakes and he believes that the son of Lonhro would be even better when he gets to the mile in the 2018 Royal Randwick Guineas.

“There was a lot of discussion going into the race with James Cummings, Glyn and the whole team,” Beadman said.

“We thought that the horse would be better suited on the speed and in his first race at Canterbury he was right up outside the lead, so he does have natural speed.

“If you went out there indecisive, hoping that you were going to get in, you wouldn’t have gotten in.

“I think that he has a mile written all over him.

“He is very brilliant, but today showed that he can take up a position whenever.

“He is a very clean-winded horse and that will assist him in getting the mile.”

Schofield has always had a big opinion of Kementari and he was clearly delighted that the decision to roll forward on the three-year-old had paid dividends.

The veteran hoop is adamant that Kementari has now stamped himself as the best colt in Australia and he is confident that he will be tough to beat in the Royal Randwick Guineas in a fortnight.

“It is very satisfying,” Schofield said.

“We didn’t know how the race was going to pan out and we had to make one of two decisions – we made the right call in the end.

“We settled him right on the speed and he just travelled so sweetly for me.

“I was mindful that I didn’t hit the front too soon on him, but he dragged me into the race.

“When he was asked to quicken in the final furlong, he was never going to get beaten.

“I’m sure that he will reproduce a run like today at Randwick in two weeks time.”

D’Argento may have suffered the first win of his racing career to date, but he lost no admirers with his fast-finishing effort and he will go into the Randwick Guineas a genuine contender.