Unbeaten New Zealand colt It’s A Dundeel is among 80 horses entered for the Group 1 Victoria Derby (2500m) to be held at Flemington on November 3.

Trained by Murray Baker, the three-year-old arrived in Australia prior to the spring with just one start to his name and has since produced three impressive victories. 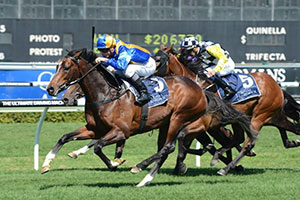 It's A Dundeel is one of 80 horses nominated for the Group 1 Victoria Derby. Photo by: Steve Hart

The son of High Chaparral won midweek races at Wyong and Canterbury before stepping up to stakes level to to win by 1 ½ lengths in the Group 3 Gloaming Stakes (1800m) at Randwick on Saturday.

Baker confirmed the Victoria Derby was in It’s A Dundeel’s sights provided he gets through his next test in the Group 1 Spring Champion Stakes (2000m) at Randwick on October 6.

“The sign of a good horse when they keep stepping up. He was up in grade today and produced a good sprint at the finish,” Baker said after Saturday’s race.

“Hopefully we can get down to Melbourne [for the Derby] if he can run good in the Spring Champion.”

Joining It’s A Dundeel in Victoria Derby nominations is boom colt All Too Hard who has so far failed to live up to pre-spring expectations.

After a successful two-year-old season many predicted the half-brother to Black Caviar would challenge Pierro as the best three-year-old in the country but he has so far failed to make an impact in three spring starts.