Humidor will head to the 2018 Doncaster Mile after he returned to winning form in the Blamey Stakes at Flemington this afternoon. 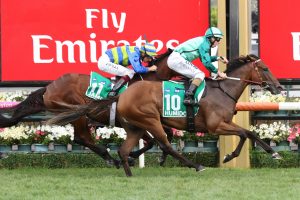 The expected match race between Humidor and Tosen Stardom did not eventuate as Tosen Stardom was the first horse beaten, but Darren Weir was still able to come away with the win as Humidor finished over the top of Hellova Street, Odeon and Cool Chap.

Weir had mixed emotions following the Blamey Stakes as he was clearly disappointed by the performance of Tosen Stardom, but he was pleased with the effort of Humidor and confirmed that he would return to Group 1 level in the Doncaster Mile at Royal Randwick in a fortnight.

“He looked to travel too fierce and not relax, so I’m not sure what is going on there.

“From a Humidor point of view, it was a big win and he is in for a good campaign.

“We expected him to work home like that and he has gotten the job done.

“He will go now to the Doncaster.

“He has had a great prep towards that.

“Ideally you wouldn’t want to see him lay-in late and he can be tricky like that.

“He will probably run in the Doncaster and back-up in the Queen Elizabeth.

“That has been the plan all along and he looks like he is on track.

Tosen Stardom was also expected to head to Sydney for the Doncaster Mile and the Queen Elizabeth Stakes, but Weir said that he is now unsure what to do with the Japanese import.

“He is a great galloper, but he didn’t go well today,” Weir said.

“I was worried on the corner when he came out to present – he normally just travels up.

“I will have to have a talk to Brad (Rawiller) and see how he pulls up.

Humidor has been $13 into $10 in the 2018 Doncaster Mile betting market with Ladbrokes and he is now on the third line of betting behind Royal Randwick Guineas winner Kementari ($4.40) and Happy Clapper ($8.50).