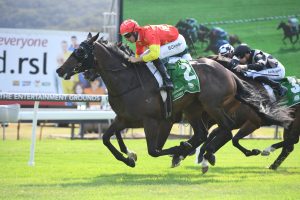 Beaten narrowly in that key lead-up to the Gold Coast’s $2 million Magic Millions 3YO Guineas (1400m), Hightail atoned second-up in the Gosford Guineas enjoying his first win since success at Randwick’s Kensington track back in January.

With Hugh Bowman retaining the ride, Hightail posted a narrow victory of his own holding just a neck on the line over the also Snowden-trained runner-up Battleground in the set weights plus penalties feature.

A patient Bowman had the eventual Gosford Guineas winner settled towards the back of the field early before coming with a well-timed assault in the closing stages to overpower the stablemate and hand Team Snowden the quinella.

“From barrier one we said to Hugh we’ll need a lot of luck and he was quite confident.

“The raced panned out beautifully. They went very quick, got a nice drag up behind them, pulled out at the right time and just managed to get the stablemate.

“He’s (Battleground) done a great job too. The blinkers switched him on today, had a gun run and hopefully he’s got some sort of hope in a maiden on the Gold Coast in a couple of weeks.”

In third rounding out the Gosford Guineas trifecta was a stablemate of Diamond Thunder, Splintex, who finished just over a length off the winner.

Newnham may have lost the Guineas at Gosford, but the in-form trainer will now be turning his attention to Brisbane on Saturday when his Wyong Magic Millions Stakes winner Diamond Thunder comes up against boom Queensland Alligator Blood.

The pair also occupy the top two lines in the all-in 2020 Magic Millions 3YO Guineas markets at Ladbrokes.com.au for the Gold Coast feature on January 11.

The Gosford Guineas win by Hightail has the galloper sitting third behind Alligator Blood ($2.10) and Diamond Thunder ($7) into $11 (from $19) to take out the Magic Millions Guineas.