Last season’s Australian Guineas winner Hey Doc has drifted in 2018 Black Caviar Lightning Stakes betting at Flemington, but trainer Tony McEvoy believes that his star galloper has had an outstanding preparation for his racing return. 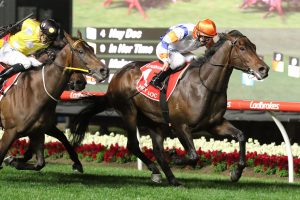 Hey Doc will return to the races in the 2018 Black Caviar Lightning Stakes. Photo by: Ultimate Racing Photos

Hey Doc has eased from $7.50 at Ladbrokes.com.au when the final field was released on Wednesday to be marked at $9 on race eve while the short priced favourite Redzel remains in the red at $1.80.

Trainer Tony McEvoy had stepped Hey Doc back up the 1600m during the Spring but he could only manage a tenth to Humidor in the Group 1 $750,000 Makybe Diva Stakes at Flemington in September so McEvoy has now given the Duporth four year old a sprinting preparation.

“He’s had a wonderful lead up and I’m really looking forward to the race,” McEvoy told AAP.

“It’s the first time we’ve trained him as a sprinter and I’m really looking forward to seeing where he sits with Redzel now being the benchmark.”

“The way he is going I think he’s a genuine top-three chance but I’ve got a lot of respect for the field.”

“However I wouldn’t go swapping my horse for anything else in the race.”

McEvoy was pleased with Hey Doc’s effort in a recent jump out down the Flemington straight when second to Black Caviar Lightning rival Redkirk Warrior.

The Lindsay Park trained Redkirk Warrior was tested with the blinkers on in the jump out and will wear them on Saturday while Hey Doc’s Black Caviar Lightning jockey Luke Currie didn’t release the brakes on his mount.

“To my eye Redkirk was getting a little shove and he had the blinkers on and all Luke was doing was cooling his jets,” McEvoy said.

“Luke said that he could have beaten him at any time.”

Last year’s Black Caviar Lightning winner Terravista shares the second line of betting with Hey Doc at $9 just ahead of the stablemates Formality at $10 and Redkirk Warrior at $11.