Hawkesbury Guineas Up Next for South Pacific Winner Indy Car

The three-year-old son of Sebring was second-up after winning at Kensington a fortnight ago and seemed to relish the quick step up to the 1400m trip. Jockey Tom Marquand made full use of barrier 7 running on from the widest part of the track and found plenty of clean air before kicking clear of the very unlucky Icebath who ran second.

Indy Car was largely undervalued in the market as a $7.00 chance with the Godolphin trained Hilo and Smart Missile gelding Yao Dash drawing all the attention. Indy Car once again proved his turn of foot was the real deal though, leaving Cummings with some big decisions to make regarding his future. 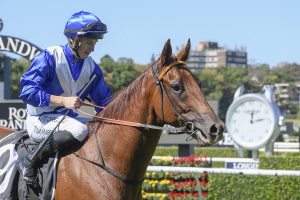 “The Hawkesbury meeting now goes to Rosehill, there’s a 1400m race and I think the Guineas is run that day, so he’ll go there” Cummings told Sky Racing.

“There’s a 3YO mile race in Queensland as well, it’s not a Stakes race but we need to see the detail around that to see if that makes sense, but certainly a nice horse going places.”

The lightly raced Indy Car has now won three from his four career starts and is a perfect 2-0 this time in. Cummings said that his racing style can be difficult sometimes, but when he’s up on the speed he’s always a chance.

“This was a nice race for him to progress from his first-up win. He’s taken that step now and he’s up to stakes grade, so I think he’ll continue up the ladder as he goes”

“His racing style leaves him a little bit vulnerable but there was good speed in today’s race again for him. He really relishes that so it gives him a chance to relax early and a nice ride from Tom, he got him to clear at the top of the straight and at the 600m when he asked him to go I think he was a bit surprised how quickly he came to him.”

Hilo looked a chance down the home straight but ultimately struggled with the trip to run third.

Yao Dash failed to feature in the minors, while the Brad Widdup-trained Icebath looks to be one to watch after being held up early down the straight.