Unbeaten colt Hanseatic has consolidated his spot as the Blue Diamond Stakes favourite with a sensational win in the Group 3 $200,000 Neds Blue Diamond Prelude (1100m) for the Colts and Geldings at Caulfield today. 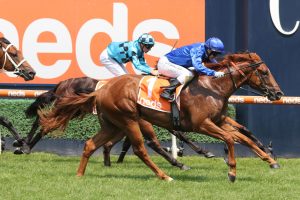 Hanseatic, above, powers home to win the Blue Diamond Prelude for the colts and geldings at Caulfield. Photo by Ultimate Racing Photos.

Hanseatic made it three wins from three starts when he came with a barnstorming run down the middle of the track to nose out the Peter and Paul Snowden trained Rulership ($2.90) who looked the winner half way down the straight.

The Ciraon Maher and David Eustace trained Rathlin ($17) also worked hard to the line to finish in third spot.

The Anthony Freedman trained colt has firmed in the betting for the 2020 Blue Diamond Stakes from $3.60 to be the $2.60 favourite at Ladbrokes.com.au.

Stable representative Sam Freedman was most impressed with the near last to first win by Hanseatic and is excited heading towards the Group 1 $1.5m Ned Blue Diamond Stakes (1200m) at Caulfield in a fortnight.

“He had to be very good from where he was because most of the winners so far have been closer to the rail,” Sam Freedman said.

“It looked like he was going to run an eye catching second and we would be happy going to the Diamond, but he really knuckled down that last hundred.”

Freedman said the Hanseatic was better behaved today than he was last time out when he won the Blue Diamond Preview (C&G) and part of today’s outing was for the colt to gain more race day experience.

“He is yet to put it all together and he got Luke out of trouble there,” Sam Freedman said.

“That is why dad (Anthony Freedman) wanted to run him again and just get him used to these surroundings and obviously on Blue Diamond Day there is going to be a huge crowd, big field.”

“He was really good out the back today to saddle. His behavior out the back was ten times better than last time so he is going the right way  and that is why dad wanted him here today not necessarily to get the run into him but to start that whole experience.”

Winning jockey Luke Currie let Hanseatic settle in the second half of the field and the Street Boss colt appreciated the open spaces when he was pulled to the middle of the straight for his powerhouse finish.