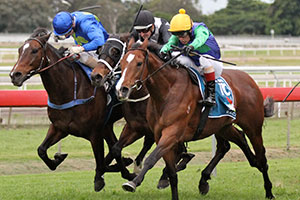 The three-year-old filly took out the final major race of the Brisbane Winter Carnival in style ahead of Skyerush, who finished second, and Gai’s Choice, who placed third.

It was the fourth win this campaign for Pear Tart, who won the Group 2 Queensland Guineas at eagle Farm in her last start.

Pear Tart surprised everyone when she ran home to win the Guineas last start after an injury prone start to her preparation, leaving everyone wondering if she was only at her best on a Heavy track.

“She’d had, as everyone knew, an unordinary run into that race with injury etc,” Thompson said.

“The three weeks into it was perfect for her.

Jockey Jeff Lloyd was the winning jockey aboard Pear Tart.

“He got her out into a good spot,” Thompson said of Lloyd’s ride.

“We drew wide again (14) but she’s a filly that makes her own luck and… he sat outside the leader like he did last time.

“Full credit to the horse, she beat the older horses today in dominant fashion again.”

It was the sixth win from just nine race starts for the talented Pear Tart, who has now won close to $700,000 in prize money.

The $45,000 yearling purchase will now be spelled before tackling the spring carnival later this year, with the Group 1 Myer Classic in November being one of her goals.