Grunt Is The 2018 Australian Guineas Winner

Grunt outfought a gallant Peaceful State to take out the 2018 Australian Guineas at Flemington this afternoon. 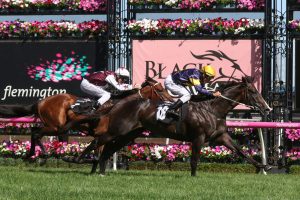 Grunt made it four wins on the trot with a tough performance in the Australian Guineas. Photo by: Ultimate Racing Photos

The pressure was on Damien Oliver after Grunt drew towards the outside of the Australian Guineas field and the leading big-race jockey deliver when it mattered once again.

He slotted Grunt in from the wide barrier and he peeled the CS Hayes Stakes winner out at the top of the straight to ensure that the three-year-old had every possible chance.

Peaceful State emerged from the pack along with Grunt and loomed as the winner, but Grunt was simply too tough and was able to shake him off in the concluding stages of the race.

Oliver has admitted that he did not ride at his best during the 2017 Spring Racing Carnival and he was clearly thrilled to have ridden another Group 1 winner – his third in the Australian Guineas.

“We just had a lovely run,” Oliver said.

“Peaceful State is a good horse and he came to him, but he was too strong for him and he fought him off well.

“He is just a magnificent specimen of a horse and he deserved a really strong Group 1 like that today.”

Trainer Mick Price has always had a very big opinion of Grunt and the O’Reilly colts win ensured that he became the most successful trainer in the history of the Australian Guineas.

Price believes that Grunt will be even better over 2000 metres, but he is unsure whether he wants to send the three-year-old to Sydney for the Rosehill Guineas.

“We had to use a bit of horse early, but the race worked out well for us,” Price said.

“I thought that the leaders had to pull up and I thought he was in a good spot.

“How he won is the horse he is – he is a really big Flemington horse with a great set of lungs on him.

“The only race I would go forward to is probably the Rosehill Guineas over 2000 metres, but I am mindful that he is going to be a really good four-year-old.

“It wouldn’t worry me if I had to put him out because his job is sort of done.”

Peaceful State lost no admirers with his second place finish, while Bring Me Roses shortened in Australian Oaks betting markets after her third place finish.