Anders could not have been more impressive first-up for the punters in the Listed $140,000 The Rosebud (1100m) at Rosehill Gardens on Saturday, the Ciaron Maher & David Eustace-trained colt putting the writing on the wall for a big spring carnival. 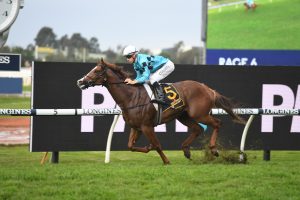 Anders could be stretched out to 1400m for the 2020 Golden Rose after an impressive first-up win in The Rosebud. Photo: Steve Hart.

The talented son of Not A Single Doubt jumped the short-priced favourite fresh in The Rosebud, run on a Heavy Rosehill track on Missile Stakes Day, and did not disappoint.

Taking up the early lead after getting the gap, Anders sat up front and dominated throughout thanks to a lovely ride by Jason Collett who kept the colt well-balanced before asking for a little more effort after the home turn.

Anders responded as asked, hitting another level and shooting ahead of his rivals for a runaway five length win over returning Group 1 placegetter Ole Kirk for Team Hawkes.

In third rounding out The Rosebud trifecta over six and a half-length off the dominant winner was Gerald Ryan’s race day market mover The Face.

Collett tipped Anders as a serious young sprinting talent to watch over the carnival, indicating the horse was likely at his best over the short distance features.

“He was very impressive,” Collett told Sky Thoroughbred Central after the race.

“He was just working through his gears, came back under me and ran away beautifully at the top of the straight.

Still, the bookies took no chances and slashed the all-in price on Anders to win the Group 1 $1 million Golden Rose Stakes (1400m) back at the track on September 26.

Anders firmed into $31 through Ladbrokes.com.au in futures Golden Rose betting, but could be a better chance in something like the Group 1 $1.5 million Coolmore Stud Stakes (1200m) run down the Flemington straight over the Melbourne Cup Carnival.

Ultra-impressive sprinting to the line, Anders held his rivals at bay and then put another two lengths on them late leading stable rep Annabel Neasham to declare him a “proper colt”.

“He’s a proper colt that’s for sure,” Neasham, about to leave Maher & Eustace to embark on her own career as a trainer, said.

“They’re going to have some fun with him.

“He’s always worked like he’s one of the best. He’s just really developed. We’ve always known he’s got an awful lot of ability.

“He was beautifully relaxed and I loved the way he stretched to the line.

“Aquis have another great colt on their hands. I’d love to take him with me!”

Neasham agreed with Collett’s assessment that the 1400m would be too far for Anders this preparation and instead suggested the colt could challenge Golden Slipper winner Farnan for the Aquis Farm slot in the $15 million The Everest (1200m) at Randwick on October 17.

“I think he is too brilliant for a Golden Rose,” she said.

“I think he is very, very good and we will just see where they go with him now. I think they will go (to the Group 3 ) San Domenico (Stakes over 1100m at Rosehill on August 29) and then see where he measures up.

“His backers have a slot in The Everest so you never know.

“He is very fast and is probably too brilliant for the Golden Rose but there is always the Coolmore as well.

“I am sure they will aim high.”

Ladbrokes.com.au added Anders to the all-in The Everest 2020 betting markets at $31.