2018 Golden Slipper betting firmer Santos will have his final lead run for the world’s richest two year old race in the 2018 Todman Stakes (1200m) at Randwick on March 10. 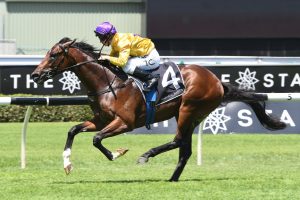 Santos stamped himself as a genuine Golden Slipper contender with an impressive win in the 2018 Pierro Plate. Photo by: Steve Hart

The Gai Waterhouse and Adrian Bott-trained Santos has been elevated to fourth line of betting at $11 for the Group 1 $3.5m Longines Golden Slipper (1200m) at Rosehill on March 24 following his powerhouse first up win in the $150,000 The Luxury Network Pierro Plate (1100m) at Randwick last Saturday.

Waterhouse has trained the winner of six Golden Slippers and her last two victors, Pierro and Vancouver, have both won the Todman Stakes as their final lead up run.

Waterhouse said after Santos beat a handy field of two year olds last Saturday that the I Am Invincible colt had been the stables number one Golden Slipper contender since early in the season even though he failed to win a race from two starts during the 2017 Sydney Spring Carnival.

“This has been our Golden Slipper horse since day one,” Waterhouse said.

“He was very immature in the Spring.

“He is still coming together.

He has furnished into a really beautiful colt.

“This horse is such an exciting horse.”

Santos had two runs at Randwick in the Spring for a debut third to the Chris Waller trained Performer in the Listed $150,000 Breeders Plate (1000m) at Randwick followed by a fourth to Legend Of Condor in the $100,000 Victory Vein Plate (1000m).

The Tony McEvoy trained Sunlight heads up the betting for the Golden Slipper at $6 with Ladbrokes.com.au ahead of Performer at $7 and the Team Hawkes trained Estijaab at $9.

Sunlight and Estijaab are likely to clash on Saturday at Rosehill in the Group 2 $250,000 Silver Slipper Stakes (1100m).