Global Quest Recovering From Slight Setback Prior To Golden Slipper

The Chris Waller trained outsider Global Quest has recovered from a slight setback in the lead up to Saturday’s Group 1 $3.5 Longines Golden Slipper (1200m) at Rosehill on Saturday. 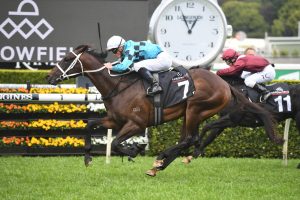 Waller informed Racing New South Wales stewards that Global Quest had a slightly elevated temperature on Monday but the colt has now returned to normal.

Waller also added that Global Quest had continued to eat well and didn’t miss any work but the colt will still have to undergo a veterinary examination before taking his place in the Golden Slipper field.

“Global Quest, he won the Breeders, but I wouldn’t say his prep has gone as we would have liked,” Waller said.

Global Quest was an early two year old winner with a debut victory in the Group 3 $160,000 Arrowfield Breeders’ Plate (1000m) at Randwick on October 5 last year and has had three lead up runs into the Golden Slipper without a win and is one of the outsiders of the field at $51 with Ladbrokes.com.au.

Global Quest’s final Golden Slipper lead up run saw him well beaten into fourth place behind Farnan again on a wet surface in the Group 2 $300,000 Todman Stakes (1200m) at Randwick on March 7.

Brenton Avdulla takes over the reins from James McDonald on Global Quest who was out of luck at the barrier draw, coming up with gate 15 but will move in two spots if all the four emergencies fail to gain a start.

McDonald will ride Waller’s other runner Hungry Heart who will jump from gate five and is rated a$26 chance at Ladbrokes.com.au.

The Trent Busuttin and Natalie Young trained Tagaloa (Michael Walker) was elevated into the top spot in the betting at $5 after drawing barrier six while the Gai Waterhouse and Adrian Bott trained Farnan (Hugh Bowman) lost his spot at the top of the market order after drawing fourteen in the original draw and is now the $5.50 second favourite.

On the third line of betting at $6.50 is the Anthony Freedman trained Hanseatic who drew barrier nine and will have the services of new jockey Kerrin McEvoy, replacing Tim Clark who was aboard the colt when he ran second to Tagaloa in the Group 1 $1.5m Neds Blue Diamond Stakes (1200m) at Caulfield on February 22.