Gem Song will press on to the Hobartville Stakes and Royal Randwick Guineas following an impressive win in the 2019 Eskimo Prince Stakes at Warwick Farm this afternoon. 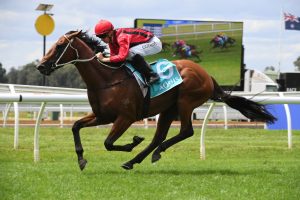 Gem Song made a winning return to the races in the Eskimo Prince Stakes. Photo by: Steve Hart

Sandbar started the Eskimo Prince Stakes as a clear favourite, following the withdrawal of Brutal, and he cruised to the lead at the top of the straight.

The Snitzel colt looked as though he would cruise to victory, but there was nothing left in the tank when jockey Brenton Avdulla asked him for an extra effort.

Gem Song settled nicely in the early stages of the Eskimo Prince Stakes and that proved to be the difference as Jason Collett timed his run perfectly to finish over the top of his rivals.

Trainer Kris Lees was delighted to see Gem Song make a winning return to the races and he confirmed that the talented three-year-old will progress to the Group 2 Hobartville Stakes (1400m) at Rosehill Gardens on February 23 and the Group 1 Royal Randwick Guineas (1600m) on March 9.

“It is good to see him win a Stakes race,” Lees said.

“He is a really good colt and he has a lot of upside.

“I thought he was struggling a bit coming into the corner and Jason switched back to the inside where you didn’t want to be, but he really had no option and he lengthened nicely when he put him under pressure.

“I think that he is going to be better suited when we stretch him out, so he has plenty more to give this horse.

“He will go through the traditional path to the Hobartville and the Randwick Guineas.

“We will see how he measures up against the better ones.

The eye-catching performance in the race came from the unfancied Purple Sector.

He started the race at big odds, but he stormed home in the concluding stages of the race and looks set for a big Autumn campaign.

Gem Song is now into $7.50 in the Randwick Guineas betting market with [Ladbrokes], but it is The Autumn Sun that remains a dominant favourite at $1.70.