Fly In Fly Out jockey Billy Egan will make a quick dash back to Sandown in Melbourne for the last race after steering Victorian filly Rubisaki to victory in the $1m Inglis Sprint 3yos (1200m) at Warwick Farm today. 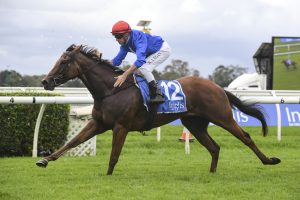 Rubisaki, above, wins the Inglis Sprint at Warwick Farm. Photo by Steve Hart.

Rubisaki ($3.30 favourite) made it five wins from seven starts when Eagan angled her back to the inside on the heavy Warwick Farm track to score a dominant one and a half lengths win at the finish.

The Gred Hickman trained Rari ($14) raced in the first three and stuck on well for second ahead of Chris Waller’s True Detective ($4.80) who tried hard to fill third spot.

Egan had ridden Rubisaki on two previous occasions and jumped to the chance to ride the Patrick Payne trained filly in the $1m Inglis Sprint which was rescheduled to today after the Warwick Farm meeting last Saturday was washed out.

Egan was also keen to ride the Dwayne Reid trained Keymaster who will go around in the last race at Sandown today at 7.30pm and he has plenty of time to fly back to Melbourne.

“I have to go back and ride for a good mate of mine, Dwayne’s horse. He also worked for Pat.” Egan said.

“She (Rubisaki) is an absolute sweet heart and she gives everything she has got.”

Winning trainer Patricck Payne said that he wasn’t sure if Rubisaki was up to the class in the $1m Inglis Sprint, but he was certain the Rubick filly would try her heart out.

“I wasn’t sure if she was quite up to the class but her attitude carries her a long way,” Payne said.

“She has got a great attitude to go with her tremendous ability.”

Managing owner Joe O’Neill would like to see Rubisaki stay in Sydney for the Autumn Carnival and with the way she handles the heavy track, thinks she will be competitive in some good class races if the tracks remain wet.

“We will have to work out where we go from now,” O’Neill said.

“We have a lot of good three year olds in Australia at the moment, but you won’t get any better three year old fillies than her.”

“I will talk to Patrick. There is a three year old fillies race 1400m at the end of the month at Flemington but there is also the Surround Stakes here and if we got a wet track up here in Sydney which you usually get here, there will have to be a good one to beat her.”